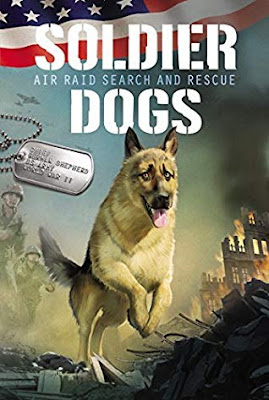 Matt Dawson, 12, is angry and unhappy. It isn't bad enough that the family has been relocated from Minneapolis, Minnesota to Canterbury, England so Matt's father could work for the war effort in England. Now that the United States has entered the war, older brother Eric immediately returned home and enlisted in the Marines. Matt is angry at Eric for leaving, and at his parents for letting him. Adding to his irritation, foster sister Rachel keeps tagging after him. The only thing that makes it all bearable is Chief, Eric's well-trained German Shepherd, left in Matt's care.

Of course, both Matt and Rachel knew what to do in case of an air raid, but so far Canterbury had been lucky. But Canterbury's luck changed on the night of June 1, 1942. When the air raid sirens began, Matt, Rachel and Chief are sent to the shelter deep in Canterbury Cathedral. On their way, they hear the roar of the Luftwaffe approaching and they aren't far away. But when Matt's mom finally arrives at the shelter with his dad, they are bearing bad news - Eric is MIA.

Upset and even angrier, Matt runs out of the shelter just as incendiaries and bombs begin to fall on Canterbury. Followed by Chief, boy and dog both get disoriented when a bomb explodes near them. Matt heads upstairs, eventually finding himself on the cathedral's roof where the fire watchers are feverishly working to remove incendiary bombs and prevent a fire. And just as he starts back downstairs, Matt discovers Rachel has followed him, and with bad news - she saw Chief run into the streets of Canterbury - no doubt confused and looking for Matt.

Heading out to look for Chief, Matt and Rachel find themselves in the middle of a catastrophic blitz. And in the midst of that, they witness a parachute landing in a canal not far from them. Rushing to help, they discover a German soldier tangled in his parachute who convinces them he will turn himself in if they help save him from drowning. But can this German soldier be trusted?

Meanwhile, Chief is having dangerous adventures of his own. After he runs into a burning building to save a man's life, he finds himself in the hands of an American solider named Landry. Not knowing how well trained Chief is, Landry immediately thinks that Chief is a real natural search and rescue dog, and begins taking him as he searches for survivors among the fire, dust and rubble caused by the bombing.

In all the chaos, will Chief, Matt, and Rachel ever be reunited with each other and with their family?

Air Raid Search and Rescue is an exciting, action-packed adventure alternately narrated in the third person from the point of view of Matt and Chief. I don't usually like novels that anthropomorphize animals by giving them language but it really worked here for showing the reader two different perspectives of the action and of course, for paving the way for Chief's future endeavors in the war.

Rachel's backstory is also interesting. She was a child of the Kindertransport that brought Jewish children from countries occupied by Nazis to England in 1939/40. She was immediately drawn to Matt, and he treated her like any 12-year-old would an annoying little sister - until the bombs start to fall. It is nice to watch their relationship evolve.

Sutter includes a lot of back matter in this novel, answering questions readers might have about dogs in war, the Kindertransport, and the bombing of Canterbury. There is also a WWII timeline. And as a real bonus, there is a pull-out poster of Chief and on the back is information about the the bombings that became known as the Baedeker Air Raids: 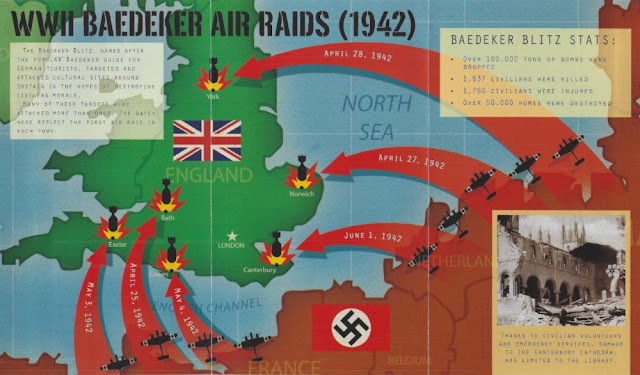 As you can see, Canterbury was the last of the Baedeker Air Raids, named after the famous guidebooks produced in Germany. It was Hitler's plan to obliterate all of the most famous cultural sites in England according to the book in retaliation for England's bombing of German cities. In the case of Canterbury, the bombing raid was pay back for the RAF's bombing of Cologne, Germany.

I actually read this book thanks to Ms. Yingling Reads review of it. I had already read a book about another Baedeker air raid, The Exeter Blitz by David Rees, which was also very good, and thought it would be interesting to read another - and it was. Those interested in WWII novels might want to pair these together.

Air Raid Search and Rescue is the first book in the Soldier Dogs series, and I am really looking forward to reading them all. They will certainly appeal to young readers interested in WWII history and the roles that dogs played.