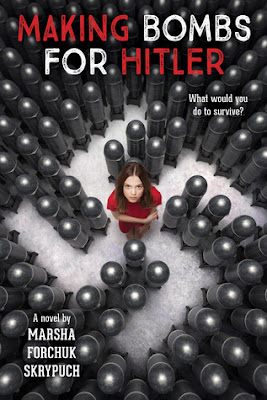 After the Nazis shoot their mother and the Jews she had been hiding, Lida, 8, and her younger sister Larissa, 5, are kidnapped from their grandmother's home in the Ukraine and sent by cattle car to Germany, along with all the other Ukrainian children the Nazis took.

Days later, arriving at a slave labor camp in Germany on March 14th, 1943, Lida's 9th birthday, she and Larissa are forcibly separated from one another, and from this point the story follows only Lida's life in the labor camp.

Told to lie about her age, Lida tells the Nazis she is 13 instead of 9, avoiding what seems to be certain death for the young children.  Because they are Ukrainian and not Jews, the children are treated a fraction better. They are put into barracks with a small useless heater, given two thin blankets for sleeping and fed two meals a day consisting of watery coffee and soup, plus a small triangle of bread made mostly from sawdust. The children are also given Saturday afternoons and all day Sunday off.  The rest of the time, they work, and soon enough, the Nazis weed out the good workers from the ones unable to meet their needs. The weak workers are sent to the 'hospital' never to be seen again. Luckily for Lida, she lands a job in the laundry for a woman named Inge, where the work is hard, but it is at least warm, since she was barefoot, having  lost her shoes pretty early on.

When Inge discovers that Lida can do embroidery, she has her remove the name and initials from clothing sent to her by her soldier husband, and embroider them with hers.  Lida does such a great job, the woman can't help but brag to the head of the camp. Lida is immediately transferred to work in a factory, where the small hands of children are ideal for making bombs. By now, the Germans are losing the war and getting desperate, while the Allies are bombing the area constantly. Lida's one goal is to stay alive so she can find her sister Larissa.

Eventually, the war ends, the Americans arrive and Lida is told that if she returns to her home in the Ukraine she will be arrested as a traitor because of the work she did for the Nazis. She finds herself living in displaced persons camps looking for her sister, and accompanied by a boy named Luka. The story ends in 1951on a much needed hopeful note for Lida.

I have to admit, I didn't know that much about the Nazi treatment of Russian and Ukrainian people sent to Germany to be used as slave labor, although I have always know there were slave labor camps, though my own work never really focused on the Eastern Europe. In that respect, Making Bombs for Hitler was a real eye-opener for me.

And it was a difficult story to read. Marsha Forchuk Skrypuch pulled no punches in her descriptions of the deplorable conditions and treatment the Nazis doled out to their enemies. The story is told in the first person by Lida, although given her vivid descriptions, her detailed observations and her rather mature language, I felt as though she were recounted her life between 1943 and 1951. That, however, does not take anything away from the immediacy of Lida's life in the labor camp, if anything it makes it all the more poignant.

Lida is a brave, determined character who feelings of guilt about losing her sister as they arrived at the camp really propels everything she does. She never loses her sense of humanity, and proves herself to be a compassionate, caring friend to the other girls. At one point she gives her cross, a family heirloom, to a Jewish girl named Zenia so that the Nazis will not suspect the truth.

Making Bombs for Hitler is actually a sequel to a book called Stolen Child, which I haven't read yet and hope it doesn't matter that I read them out of sequence. I am curious to continue the story of Lida and Larissa.

The Nazis were so cruel and violent in reality and I feel I should warn sensitive readers that their are some graphic descriptions in Making Bombs for Hitler. But it is also a book that should be read, especially, as I said above, I haven't found another book like it. I know there are a number of books that take place in Russia, including Siberia, but none focus of the Nazi treatment of stolen children the way this novel does, making this an important book for young readers to read.

This book is recommended for readers age 9+
This book was sent to me by the publisher, Scholastic Press