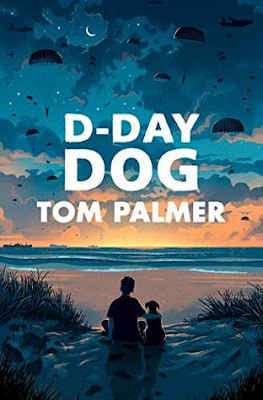 Jack Ashville, an 11-year-old living in England, had always wanted a dog, and finally his parents had said yes. Now, except for school, he and Finn are inseparable, and Jack has worked very hard taking care of Finn and having fun with him. But Jack also loves to play video games with his dad, a soldier in the Army Reserves. Their newest video game is based on the D-Day invasion of June 6, 1944, and while his dad wants to teach Jack something about D-Day before playing, Jack just wants to get to the video game. Then, Jack learns that his father might be deployed to a war zone, and he couldn't be more excited.

At school, Jack's class is beginning to learn about the D-Day invasion of the Allies in World War II in preparation for a class trip to the beaches of Normandy, France. One of their assignments is to pick a soldier who died on D-Day and is buried in Ranville Cemetery there and learn all about them. Then, when they arrive at Ranville, each student can plant a small cross with a poppy on it on the soldier's grave.

At first, Jack is pretty gun-ho about the trip, but after hearing his parents fighting about his dad's deployment, and learning that his dad would be staying at this
grandmother's for a while, until things can be worked out, he's feeling a little deflated about everything. However, when his teacher suggests Jack research "D-Day and dogs," his enthusiasm picks up again as he's sure he's found the perfect soldier to honor.

That is until he reads about what happened to his soldier and the dog he trained to parachute out of an
airplane on D-Day. Emile Corteil was a young private in the 9th Parachute Regiment and Glen was his German Shepard. When it came time to jump, Glen got spooked by all the noise below and Emile had to literally throw him out of the plane. The jump didn't killed them, but both did die on June 6, 1944. Reading their story, Jack become so angry at what he feels is Emile's betrayal of Glen, that he subsequently refuses to go on the class trip. In fact, Jack does a complete 180° turn, now finding the reality of war to be abhorrent.

Trouble is nobody's having any of that and Jack finds himself on the bus sitting between his friend Lucas, a special needs student, and Kassandra, a girl whose family had to flee their home in Aleppo because of war. But anger causes Jack to act out and now his punishment is to sit by the bus driver, a gruff, chain-smoking old soldier, and apart from the other kids.

Needless to say, Jack's class trip is a real eye-opener for him as he learns not just about the cost of war in human life, but also comes to understand why people are willing to fight and die for what they believe, and that there is a big difference between the reality of war and war fought in a video game.

It is interesting to read the way Palmer has brought three subsequent wars into this story. There is Jack's dad, who could be sent to fight in the war in Afghanistan, the bus driver who had fought in the Falklands War, and Kassandra, a refugee from Syria whose family lost everything, including her beloved dogs, in the fighting there. American readers may not be familiar with the Falklands war, but there is enough about it in the driver's story to understand what happened. Each one contributes to Jack's increasing understanding about war.

Palmer has poignantly captured the volatility of an 11-year-old's feelings and emotions in Jack, which run the gamut of happy, sad, angry, betrayed, and even understanding. Jack romantic, almost idealistic ideas about war come crashing down when he learns that his father actually puts his family first and being a soldier second, and those ideas seem to just spiral down as the story goes along until Jack can finally see his way to a more realistic concept of war, making this a nice coming of age story.

I have to admit, I knew nothing about paradogs until I read D-Day Dog but although found the idea interesting, I felt a big like Jack when he discovered what happened to Glen. I would definitely recommend D-Day Dog as it is a well-written contemporary story and a timely book for young readers who may be interested in WWII.

There is a recent addendum to the story of Emile Cortiel and his dog Glen. Emile and Glen were buried together in Ranville Cemetery, even though it was a breach of military rules, but as of now, there is no mention it anywhere. Now, a new British memorial is to be built to honor the men and women killed in 1944 liberating France and will include a memorial dedicated to all the animals who were killed in action during the summer of 1944, including Glen. You can read the whole story HERE