The Good Son: A Story From the First World War Told in Miniature by Pierre-Jacques Ober, illustrated by Jules Ober and Felicity Coonan 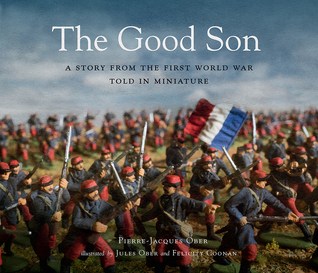 The Good Son is probably the most unusual book I've reviewed on this blog. It is a World War I story about one small soldier's experience and although it's a picture book for older readers, the recommended is age 14+. And it isn't exactly illustrated in the traditional sense - each page is photographed using customized painted miniature figures, more sophisticated versions of the kind toy solders so many kids played with, and all of them are set in detailed landscapes, creating powerfully effective tableaus.

Written one hundred years after the end of WWI, the tale opens, in slightly blurred black and white photos, long after the war is over.  It was a war that was supposed to be over by the first Christmas, but instead went on for years, while people suffered and kept going into battle.
The story shifts then to color photos of Pierre, a young French solder, sitting alone, locked in a barn. Pierre is facing execution for desertion, having gone AWOL for two days to spend Christmas with his widowed mother and not wanting her to be alone. Left by himself in the barn, Pierre has time to think about why he enlisted, about loyalty, about the horrors of war, and about what had been his hopes and dreams for his life after the war.

Believing the propaganda and wanting to make his mother proud, Pierre had, like so many men, signed up to fight once war was declared in 1914. As the war drags on, and more and more men are killed, Pierre realizes that war is terrible, a point that is made over and over. But, Pierre was a good soldier, even receiving a commendation for capturing six German soldiers, albeit, soldiers who are tired of war and just want to be out of it - feelings Pierre shares with them.

Readers learn a lot about Pierre as he sits in the barn awaiting his fate. His friend Gilbert, who once saved Pierre's life, brings him in food, wine, and company. But even Pierre's good behavior and  commendation don't help him when his colonel sentences him to be shot for desertion the next morning: 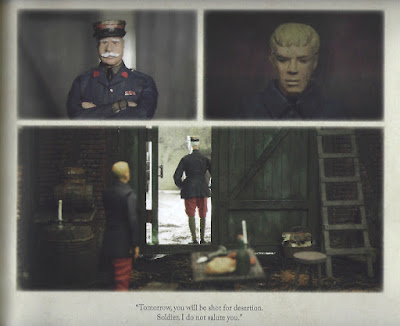 As the war drags on, and morale sinks among the other soldiers, the colonel had decided to make an example of Pierre.

So, no, Pierre doesn't not survive the war but his story is sure to remain with sensitive readers long after they close this book.

The Good Son is probably one of the most effective anti-war books I've ever read. Pierre's story is told in one or two short lyrical sentences on each page, with accompanying photos that move the tale along, revealing the pointlessness and the unfairness of war. Readers will find themselves asking questions about how propaganda is used to motivate people, especially young people, about patriotism, and about how does a good son, a good soldier end up in front of a firing squad? All this makes The Good Son is a very interesting and unusual philosophical look at war.

An compelling point that this book makes is that war is fought by little solders, young men like Pierre, and that these soldiers are at the mercy not only of the military, but also the politicians who decide to go to war, a point the is driven home through the metaphorical use of little toy soldiers, making Pierre's story all the more poignant. And I think that the little toy soldiers have a much more profound impact on the reader that conventional illustrations would have had.

You may have a hard time getting your teens into this picture book, but I believe that once they begin to think and explore its pages, The Good Son will really resonate with them. After all, some of them may be the future's little soldiers.

Back matter includes A Note from the Author and photographs and an explanation on The Process by which The Good Son was created. You can also find would some photographs of how each tableau was created on the author's Instagram page.

This book is recommended for readers age 14+
This book was sent to me by the publisher, Candlewick Studio