Every Sunday morning, I look forward to reading the week's round-up of middle grade fantasy and science fiction reviews compiled by Charlotte at Charlotte's Library.  And at the end of her round-up, Charlotte always includes a feature called Other Good Stuff.  This week, she has included a link to an article at Tor, publishers of fantasy and science fiction, that interested me very much.  Why?  Because it was about one of my very favorite things to eat - Turkish Delight.  The articles is called Why was Turkish Delight the Ultimate Temptation in C.S. Lewis' Narnia?

This article refers readers to another one published in JSTOR/Daily.  Written by Cara Strickland, it is called Why Was Turkish Delight C.S. Lewis's Guilty Pleasure? and basically says the same thing as the Tor article (but do read them both, they are equally interesting).  But why am I writing about this here, on The Children's War?  Because...

"Lewis began taking notes for the story that would eventually become The Lion, the Witch, and the Wardrobe in 1939, when he and his household began receiving groups of schoolchildren fleeing the bombings of World War II...But the book wasn't finished until late in the 1940s, and it was published in the autumn of 1950, just in time for Christmas.

The lengthy timeline between setting and writing meant that Lewis, unlike Edmund, experienced wartime rationing.  On July 26, 1942, confectionery was added to the list of items that required coupons from a ration book along with money to purchase.  In addition, one needed to register at a shop before making a purchase, and when new stock came in, the lines were long and quantities limited.  Not only were sweets hard to come by, even when you had the ration coupons, but prices were also exorbitant.  It was hardly the time for pounds of Turkish delight..." 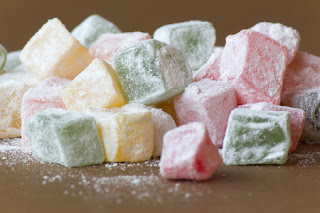 Way back in 2011, I did a post for Beth Fish Read's Weekend Cooking feature about Turkish Delight, including two recipes for making it.  It all began like this:

One year, I picked up a box of Turkish Delight because it is a confection I have always loved. When my Kiddo saw it on the kitchen counter, she looked at me in amazement, saying “Turkish Delight is a real thing? I thought it was just something C. S. Lewis made up in The Lion, the Witch and the Wardrobe.” She was very disappointed in the taste, though, given what she had read in Chapter 4 – Turkish Delight
“It is dull, son of Adam, to drink without eating,” said the Queen presently. “What would you like best to eat?”“Turkish Delight, please, your Majesty, said Edmund.The Queen let another drop fall from her bottle on to the snow and instantly there appeared a round box, tied with green silk ribbon, which, when opened turned out to contain several pounds of the best Turkish Delight. Each piece was sweet and light to the very center and Edmond and never tasted anything more delicious. He was quite warm now and very comfortable.

When I was growing up, there were two things I loved getting in the mail from relatives in Britain.  One was a big, fat roll of English newspapers sent once a month, the other was a big box of Turkish Delight sent in a Christmas package.  Sadly, my Kiddo never developed a taste for Turkish Delight, but she did read and love all of the Narnia books, and still occasionally re-visits them.

Thanks, Charlotte, I probably wouldn't have known about these two wonderful articles on Turkish Delight if it weren't for your round-ups.
Posted by Alex at 11:19 AM