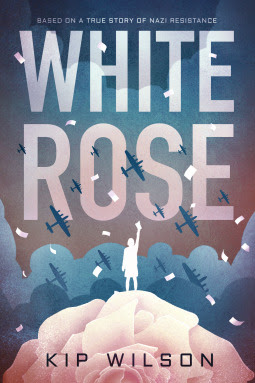 The people I tend to admire most are the ordinary citizens who find themselves in extraordinary circumstances and who act bravely in the face of danger. Which probably explains why I like resistance stories do much. One of those people who has always been high one my list is Sophie Scholl, the young German university student who stood up to the Nazis and paid with her life. So naturally, I was pretty excited when I read that a novel in verse about Sophie and the other members of the White Rose resistance was being published. And when I was offered an ARC of Kip Wilson's work, I jumped at the chance to read it. I was not disappointed. Wilson definitely did Sophie justice in this fictionalized biography.

Told in free verse, Wilson opens her fictionalized biography of Sophie with her arrest in 1943 and her first interrogation by the Gestapo, then immediately sends the reader back to 1935 and happier, almost carefree days with her large, loving family. At first, Sophie and older brother Hans are willing members of the Hitler youth - she in the Bund Deutsche Mädel (BDM) and he in the Hitlerjugend (HJ). But as more restrictions are imposed on Germans, and especially on German Jews, Sophie begins to see Hitler's regime for what they really are.

By the time she's at university with Hans, Sophie has done much soul-searching, worrying that her silence makes her complicit in the regime's shameful actions, and now she desires only to do the right thing - to stand up for her beliefs. Soon, a leaflet comes her way, and judging by the inky fingers on Hans's hands, she suspects he has something to do with it, and angered that he has used her idea:

"Duplicating leaflets and sharing
them with the world -
this was my idea.

Calling themselves the White Rose, Sophie is determined to be part of her brother's resistance group and work on the anti-Nazi leaflets they produce. Once she is finally let in, her job is to make sure the leaflets get into the hands of an many people as possible, including some influential people.

While the Sophie and the other members of the White Rose work against the Third Reich, readers also follow the efforts of Robert Mohr, the Gestapo investigator who is determined to find and arrest the traitors who are "the masterminds of this plot" to undermine the Nazi government. We hear from Hans, Christoph Probst, who was executed along with Sophie and Hans, Sophie's friend Fritz, even Jakob Schmid, the school custodian who turned them in, and more, making this a really in-depth, well-rounded narration. But one of the things I really liked was how Wilson shows readers that Sophie, Hans and their friends were also typical kids, getting together and listening to music and just enjoying each other's company. Their passion and their friendships are kind of things that makes them so easy to identify with.

Although, Wilson arranged White Rose in a non-linear way, going back and forth in time to present events relevant to understanding how and why the Scholl siblings did what they did, it is not at all confusing, but rather heightens the tension and at the same time, makes the actions of the White Rose all the more inspiring.

Of course, we know how things turn out for Sophie and the White Rose resistance, but Wilson has nevertheless created a nail-biting story that gives some insight based on extensive research into what the key figures might have been thinking and feeling, both the pursued and the pursuers.

Sophie Scholl never regretted what she did, and went to her death believing that the world would take notice of what she did, learn from it, and carry on the work of defeating the Nazis:

"Because I am
courageous and
matter-of-fact
about what I hope will happen now:

Sadly, that didn't happen in Nazi Germany but because White Rose is such a well-done work of historical fiction, it will hopefully resonate with readers in today's world.

Wilson's back matter includes a list of the Dramatis Personae, a Glossary of German words and phrases used, a list of Selected Sources for more investigation, and an Author's Note.

You can also find a Reader's Guide that uses both White Rose by Kip Wilson and We Will Not Be Silent: The White Rose Student Resistance Movement that Defied Adolf Hitler by Russell Freedman courtesy of Versify Books.

This book is recommended for readers age 12+
This book was sent to my by the publisher, Versify

Email ThisBlogThis!Share to TwitterShare to FacebookShare to Pinterest
Labels: German Resistance, Novel in Verse, The White Rose, YA