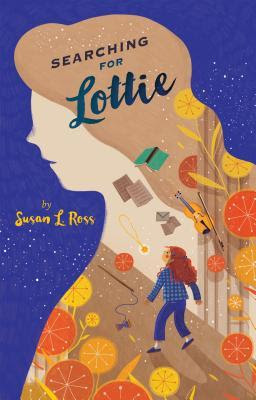 When seventh-grader Charlotte "Charlie" Roth is given a family tree project to do for school, she decides to try to find out what happened to her great aunt and namesake, Charlotte "Lottie" Kulka, older sister to Charlie's Nana Rose. The family has always assumed that Lottie had perished in the Holocaust, but now Charlie wants to learn more about her and maybe even discover what really happened to her. Lottie had been a talented violinist living with her family in Vienna, and had been sent to Budapest, Hungary to study music there just before the Nazis annexed Austria. Lottie's younger sister Rose and mother survived the incoming Nazis by fleeing Vienna after their father and husband was arrested. He to was never heard from again.

Nana Rose is more than happy to help Charlie, and sends her an old diary of Lottie's that she had managed to save. The only problem is that it is looks like it is written in German, but when a friend's grandmother tries to read it for Charlie, she tells her it is a music journal that includes all the people she went to concerts with and that it is not only written in German, but in Hungarian, too. Two names stand out - one is Nathan Kulka and the other is Johann Schmidt.

Using mementos, old photos, letters, Lottie's journal, and Nana Rose's scrapbooks and memories, Lottie slowly begins to form a picture of who Lottie was, but she is not closer to finding out what happened to her. Nana Rose knows who Nathan Kulka was, but never found him, either. The son of a dentist, she thought maybe he might also be a dentist and living in Connecticut after the war, but she had never followed up on it. Could it be that he was indeed a long lost relative who might be able to shed some light on Lottie's fate?

Like her namesake, Charlie is also a talented violinist and is hoping to be named the school's orchestra concertmaster, an honor usually reserved for 8th graders. In between research, school, family life, and thinking about her crush, Charlie spends as much time as possible practicing for her audition. When the results come in, Charlie is surprised to learn that there is a boy who is crushing on her.

Searching for Lottie is a novel based on Susan Ross's family history, which you can read more about on her website Here and in her Author's Note at the end of the book. I thought that Charlie's quest to discover what happened to Lottie, her life as a middle schooler, and her aspiration to become concertmaster were nicely intertwined in this short novel. I loved seeing Charlie's determination even in the face of disappointment, her courage in approaching strangers, not all of them friendly, to find out more about Lottie, and her patience with her grandmother, who is clearly the beginning stages of Alzheimer's. Nana Rose's fading memory highlights how imperative it has become to record stories regarding the Holocaust that might otherwise be lost forever, especially as more and more witnesses to it pass away.

One thing I was surprised by is that Nana Rose never tried to get in touch with the person in Connecticut she thought could be Nathan Kulka, despite her great love for her missing sister. I know she said it was too painful, but still, Kulka isn't a common name and she could have returned to this later when she had some distance from the past.

Still, I thought this was an interesting novel, and despite one or two terribly convenient coincidences, one I would recommend. Ross does manage to let her readers know that the trauma of the Holocaust is real and deep, but without being overly graphic, making this a good book for kids in the 4th, 5th, 6th grades who may just be learning about WWII.

This book is recommended for readers age 8+
This book was an EARC received from the publisher, Holiday House
Posted by Alex at 8:36 AM