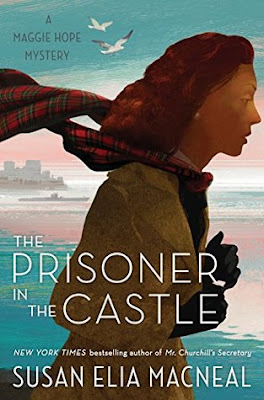 In a homage to Agatha Christie's novel And Then There Were None, comes the eight installment in the Maggie Hope series. And it's a good one.

It's November 1942, and for almost five months now, SOE agent Maggie Hope has been held as a sequestered prisoner in a castle on the deserted Isle of Scarra in Scotland. Sure, she has freedom to move around around the castle and the island, since no one lives there but their jailer Captain Evans and the McNaughton family that helps out in the castle, but it also means no phone calls or letters or communication of any kind with the outside world. And Maggie isn't alone on the island. In fact, there are nine other agents, all sequestered because they, like Maggie, know high level wartime secrets that the Special Operations Executive believes they might inadvertently let fall into the wrong hands.

The agents are well taken care on the island. Once a month, a boat arrives with their Jungian psychologist Dr. Charles Jaeger and whatever supplies are needed, but staying only a very short time.

Into this already sinister setting comes SOE agent Camilla Oddell, sent to the island after killing another agent during a training drill. Naturally, once the first body is discovered, that of Captain Evans, she immediately comes under Maggie's suspicions. But why? What would be her motive? Breaking into Captain Evans' office, the agents use his radio to call Arisaig House, command center for SOE agent training, but before they can come to get his body, another death is discovered.

As more agents are murdered, it becomes clear to Maggie that the murderer is one of the agents. When a severe storm hits the island, lasting for days, and making it impossible for a boat from Arisaig House to come, Maggie realizes that there is also a German spy, who could be living in the castle or hiding elsewhere. Can she discover what is happening before she becomes a victim?

Meanwhile in London, the trial of the Blackout Beast (See The Queen's Accomplice, Maggie Hope #6) begins, and in a surprise move, Nicolas Reitter, the accused murderer, pleads not guilty. Now, the case will go to trial and Maggie is the only living witness. Detective Chief Inspector James Durgin, who has more than a professional interest in Maggie, must now try to find the sequestered agent, or Reitter will go free.

Yes, for a "locked room" or rather a deserted island mystery, there's a lot going on here. MacNeal has imbued this novel with an interesting, eclectic cast of characters, all reflecting the kind diverse backgrounds of the real agents in the SOE, and then some. Readers get a real sense of each one, even those that don't last very long.

And this is a novel where the setting plays a much of a role as each character. Killoch Castle, where they all live, has a really storied history of its own. Built in 1900, it is a large and ugly Tudor style structure, a mix of "Victorian and Edwardian excess," and populated by a large collection of taxidermied wild animals. It had been the hunting lodge of a wealthy man with a big ego named Marcus Killoch, reputed to be quite the playboy in his day, but who is said to have killed ten of his invited guests one night, and then himself.

There certainly seems to be parallels between Killoch's murders, the murders of SOE agents, and Christi's And Then There Were None, but like all good mystery writers, MacNeal gives The Prisoner in the Castle her own spin.

I enjoyed reading this novel as much as I have enjoyed all the Maggie Hope mysteries. This one was very different, in that Maggie is very frustrated at not being able to use her training for the war effort (be careful what you wish for, Maggie), and yet it was still war related and exciting. And I have to admit, I was surprised by who turned out to be the killer and who was the spy. And they weren't the only surprises. And a surprise ending is always a good thing in a mystery.

For your information, I am including the cast of the island characters, because in the beginning I found I had to make a list to keep them straight until I got to know them better:

The Three McNaughtons
Angus
Fiona
Murdo - their son
Posted by Alex at 12:16 PM