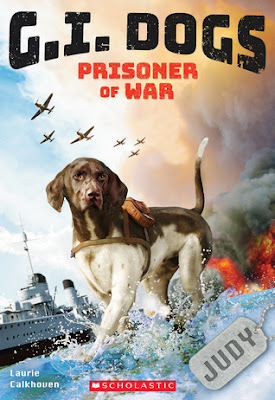 Judy is an English Pointer born in Shanghai, China in 1936. She's a curious pup and, at only three weeks old, she escapes her kennel and has some wild adventures in Shanghai, including her first run-in with Japanese soldiers, who kick her out of their way. By the time she gets back to the kennel, her brothers and sisters have all gone to homes, and the kennel owner decides to keep Judy.

At six months, however, Judy finds herself an official member of the British Royal Navy, on a gunboat patrolling the Yangtze River. English Pointers are supposed to be good hunting dogs, but that isn't Judy's skill. Instead, Judy turns out to be an excellent watchdog, able to sense oncoming danger long before any humans do. A helpful skill on the dangerous, pirate infested Yangtze River.

By the time WWII officially begins in 1939, Judy is on another gunboat, the HMS Grasshopper, sailing between Singapore and Hong Kong. When the U.S. enters the war in December 1941, everything changes. In early 1942, the Japanese occupy Singapore and the HMS Grasshopper is ordered to evacuate British women and children, but on their way to safety, the boat is hit by a bomb and Judy is trapped below deck.

Rescued, she finds herself on an island with the survivors, but no food or water. Luckily, Judy's keen senses discover an underground fresh water stream. Eventually they are rescued, and Judy and surviving men of the Grasshopper make the long trek to Sumatra, where they had hoped to get a ship to India, but instead find themselves prisoners of the Japanese.

Life in their Japanese prison camp is hard, particularly so for Judy. She hadn't liked Japanese soldiers since she was a puppy in Shanghai and they would kick her out of their way, and things never got better. If the men are given little to eat and drink, there is nothing for Judy, and beatings are common for all POWs. Judy learns to fend for herself, sharing whatever she catches with the other POWs, and learning to hide from the Japanese.

Both Judy and her special human, Frank Williams survive life as Japanese POWs and after the war, they go to live in England. Bored, Frank gets a job in Africa, and Judy spends her remaining years exploring the African bush there.

Judy, Prisoner of War is a fictionalized version of Judy's true story, and it is told from Judy's point of view. This is a nice chapter book that isn't overly graphic in describing the horrendous treatment of the POWs held captive by the Japanese, even though they were known for their particular cruelty. What the book does focus on instead is the loyal relationships that developed between Judy and the different special humans in charge of her.

Judy was clearly a very intelligent dog, otherwise she probably would never have survived the events she lived through, but I think at times, Calkhoven may give her a little more reasoning power than dogs actually have. Yet, it doesn't take away from the story, and is there for the readers understanding. And Judy is sure to endear herself to young readers, especially when they see how sensitive and comforting she was to the youngest victims of the war.

Be sure to read the back matter and look over the photographs to find out more about Judy and her wartime experiences.

Judy, Prisoner of War is a nice introduction to historical fiction, and the role of dogs in wartime situations. It would also be a great read aloud.

This book is recommended for readers age 7+
This book was provided to me by the publisher, Scholastic Press
Posted by Alex at 11:16 AM