The Edelweiss Pirates by Jennifer Elvgren, illustrated by Daniela Stamatiadi 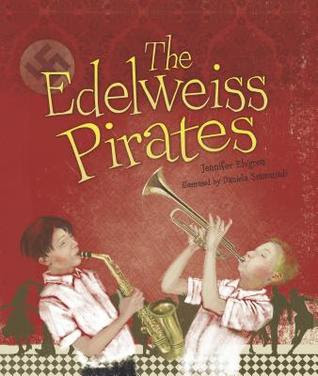 In a country where any form of resistance or rebellion against the repressive Nazi regime almost always meant certain death, most resisters and defiers went underground and worked from there. But one group that was more open in their defiance was the Edelweiss Pirates. This was loosely connected groups of youths throughout Germany who lived by their own moral code, refused to participate in the Hitler Youth, and continued to do things the way they wanted and that included swing dancing and listening to jazz, both of which were prohibited in Nazi Germany.

Now, Jennifer Elvgren, who wrote the excellent book The Whispering Town, has successfully captured the rebellion of the Edelweiss Pirates in her new book. Taking place in 1938, and told in the first person present, it is the story of Kurt, the younger brother of Albert, a member of the Pirates. Kurt desperately wants to be just like his brother and join him with his friends swing dancing, listening to and playing the music of great jazz artists like Louis Armstrong and Duke Ellington. But as Albert sneaks out one night, he tells Kurt that he's too young and it's too dangerous - they could be arrested. Instead, Albert gives Kurt a Louis Armstrong album.

That weekend, Kurt invites his Jewish friend Fritz to listen to the album with him. Fritz sneaks in through the same window Albert sneaks out of. The two boys are soon playing the music on the album by ear - Fritz on sax, Kurt on trumpet. At school, Kurt becomes more and more troubled as he sees anti-Semitic incidents directed at Fritz, but knows it is not the place challenge these acts. Instead he waits impatiently until he can be an Edelweiss Pirate like his brother - painting over swastikas and spreading around anti-Hitler leaflets.

Even after witnessing Fritz being forced to read a story to the whole class that says the Jews are their enemy, Kurt still does nothing to help his friend. Then, the school concert comes around, and the students are supposed to play music by Hitler's favorite composer, Richard Wagner. With his parents sitting in the audience, there to hear him play his trumpet, Kurt thinks of all the humiliations he has seen Fritz subjected to and before he knows it, he has finally finds a way to declare his defiance by loudly playing Louis Armstrong"s Saint Louis Blues instead, to the surprising accompaniment of Albert and the other Pirates, and even with some support from the audience, including his parents.

Such acts of open defiance were dealt with harshly, and Kurt is aware of that, but it was worth the risk. The next morning he discovers a note with an Edelweiss pin from his brother. Kurt is finally a Pirate, with the code name Blues.

The Edelweiss Pirates is indeed an interesting look at a group of resisters that most people have never really heard of, and although they didn't start out as saboteurs, by 1938, they were beginning to increase their subversive acts against the Nazis.

I liked that the story was told from Kurt's point of view. This coming of age story allows his frustration at not being able to protest the things he is seeing to grow until he must take a stand, even at the risk of severe punishment at school, and possibly at home.

Stamatiadi's earth-toned illustrations are simple, but never let the reader forget that they are reading a book that is set in Nazi Germany by including the symbols of that regime throughout, including the required picture of Hitler in the classroom.

At a time when most people were afraid to speak out against the injustices and cruelties they were witnessing on a daily basis, Kurt is an inspiring character, finding his voice and means to protest. This is indeed a picture book for older readers that should resonate with strongly with them even today.

Be sure to read the Author's Note at the back of the book to learn more about the history of the Edelweiss Pirates. You'll also see that there aren't any recommendations for age appropriate further reading on this topic because there simply wasn't anything until The Edelweiss Pirates was published.