Write to Me: Letters from Japanese American Children to the Librarian They Left Behind by Cynthia Grady, illustrated by Amiko Hirao 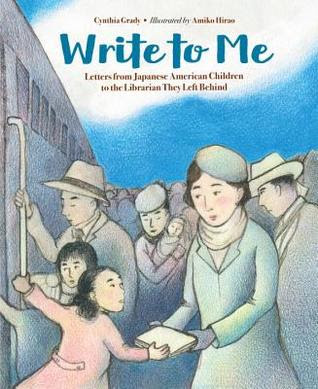 After the bombing of Pearl Harbor and the entry of the United States into WWII, this country, the country that was fighting for freedom and democracy aboard, did a terrible thing to some of its citizens. It began when President Franklin D. Roosevelt signed Executive Order 9066 on February 19, 1942, an order that authorized the internment of over 100,000 Japanese American citizens, including men, women, and children, as well as any resident aliens from Japan.

Write to Me is the story of one San Diego librarian, Clara Breed, who saw the injustice of incarcerating innocent people and whole families and tried to make it somewhat bearable for her young library patrons. Grady begins with the sad moment when young Katherine Tasaki has to return her books and relinquish her library card. Later, seeing the children she knew from the library off at the train station, Miss Breed gave out books and stamped postcards for the kids to write and let her know how and where they are and if they needed anything.

Soon, the postcards Miss Breed had give out began to arrive at the library from [Santa Anita Racetrack] Arcadia, California. She began writing the kids, sending them boxes of books and more postcards. The one time she visited Santa Anita, she brought even more books. After seeing the kinds of circumstances her young friends were being subjected to and the enjoyment the books she sent gave them, Miss Breed began writing letters and magazine articles asking for libraries to be opened in the internment camps for the kids to have easier access to reading.

Miss Breed continued to correspond with the kids she knew even after they were moved to the Poston Internment Camp in Poston, Arizona, in the middle of the desert. She also continued sending books, as well seeds, thread, soap, and crafts materials. Learning about the harsh desert conditions they lived with everyday, Miss Breed continued to write letters and magazine articles, hoping to make the country aware of how its citizens were being treated.

Write to Me is a picture book for older readers who are just beginning to learn about this period of American history and while it focused on Miss Breed's actions more than on the actual treatment of the Japanese American families she tried to help or the pervasive racism towards them, it does show young readers that one person can really make a difference in the lives of others. I think that's a message that will certainly resonate for them in today's world.

Interestingly, the focus of each of Amiko Hirao's gently muted color pencil illustrations is reflected in the postcard excerpts sent by the children that are found on almost every page.

There is extensive back matter, including an Author's Note, a recounting of Notable Dates in Clara Breed's Life, Selected History of Japanese People in the United States, a Selected Bibliography, and suggestions for Further Reading. The front and back end papers contain relevant captioned photographs.

Though it is for a somewhat older child, with scaffolding teachers might want to pair this with I Am An American by Jerry Stanly, for a more rounded picture of Japanese American internment camps.

The Japanese American National Museum has an online collection of letters written to Clara Breed from her young patrons incarcerated in internment camps, including Katherine Tasaki. You can read them HERE

One of the magazines Clara Breed wrote articles for was the Horn Book Magazine and you can read one of her articles "American with the Wrong Ancestors" published July 7, 1943 HERE

Clara Breed wrote another article in Jan/Feb 1945 issue of the Horn Book Magazine, which is not online but I found it in the library. The article is "Books That Build Better Racial Attitudes" and while it is really dated, I was curious to see what she recommended. One of the books is called The Moved-Outers by Florence C. Means, about the internment of a Japanese American family, and may very possibly be the first book about it. It was also a 1946 Newbery Honor book. I actually read it when I was researching my dissertation, but ultimately didn't use it, except as an example of patriotic propaganda. I'm definitely going to have to reread it one of these days.
Posted by Alex at 8:03 AM