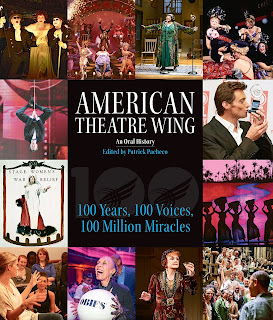 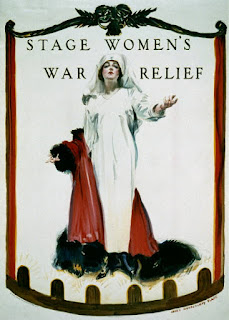 Shortly after the US entered WWI, the Stage Women's War Relief was founded by playwright Rachel Crothers, and 6 fellows playwrights and actresses. Run entirely by theater people, these volunteers worked hard sewing, running clothing and food collection centers, setting up and manning a canteen on Broadway for servicemen, and selling liberty bonds, among other things. And they didn't limit their work to just New York City - there were five other branches throughout the country. Altogether, by the end of WWI, the Stage Women's War Relief had raised almost $7,000,000 for the war effort.

In 1939, even before the U.S. entered WWII in 1941, the Stage Women's War Relief was revived, organizing clothing drives and knitting for refugees in Europe, and, of course, fundraising. Once the U.S. entered the war, the name of the organization was changed to The American Theatre Wing for War Service. Beside Crothers, one of the other people who helped organize this was Antoinette Perry, for whom the Tony Awards are named).

One of their most popular measures was the Stage Door Canteen. Opened in March 1942, it was staffed entirely by theater people and open to all serviceman. There was entertainment by well known performers like Frank Sinatra, the Andrew Sisters, Ethel Merman, and hostesses included such luminaries as Katherine Hepburn, Bette Davis, Helen Hayes, and ever Gypsy Rose Lee. Servicemen could be served refreshments (but no alcohol), they could jitterbug the night away with Lauren Bacall, a wounded solider could find help eating by Ingrid Bergman, or they could find a shoulder to cry on if needed. One of the best things about the Stage Door Canteen was that it wasn't segregated - everyone was welcomed.
I love the theater and I really enjoyed reading American Theatre Wing, An Oral History: 100 Years, 100 Voices, 100 Million Miracles, especially the pages devoted to WWI and WWII. I suspect I will be reading this book again and again. Pacheco has included so much information I didn't know about the theater along with so many wonderful photographs I've never seen before. I was a little surprised that he didn't have more drawings by Al Hirschfield or the wonderful postcards by Barney Tobey: 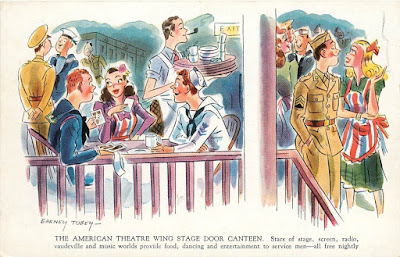 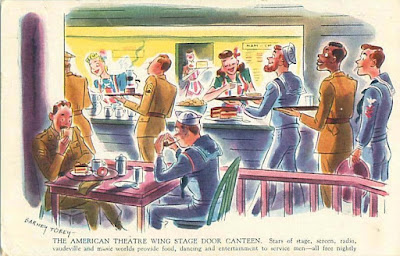 I'm not much of a collector, but I have bought a few of these postcards on Ebay, as well as my very favorite piece of memorabilia - Stage Door Canteen paper dolls. I loved paper dolls when I was a kid, and I couldn't resist these when they can up on Ebay at a reasonable price:
If you are a lover of live theater as I am, I can't recommend Patrick Pacheco's book American Theatre Wing, An Oral History: 100 Years, 100 Voices, 100 Million Miracles highly enough.

This book is recommended for everyone