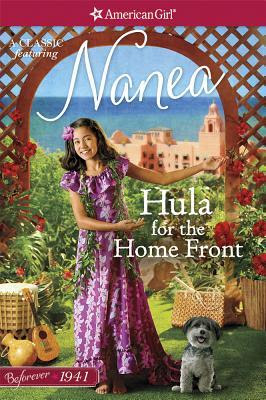 It's February 1942, almost two months since the bombing of Pearl Harbor and Nanea Mitchell, 9, is getting ready to go back to school. But school won't be the same for her and her friend Lily now that their other friend Donna has been sent back to the United States with her mother. And then, she finds a new girl sitting in Donna's seat at school.

To make matters worse, the new girl, Dixie Morena, is given the important job of class War Stamps monitor, a job Nanea thought she should have been given. It's a job that involves the weekly sale of war stamps to the kids in the class, with the hope of winning a coveted Minuteman Flag if they buy enough stamps. Nanea tries to be friendly, but Dixie doesn't seem interested, in fact, she seems bored - always yawning and putting her head on her desk. But after an incident that finds both girls in the principal's office, Nanea, Lily, and Dixie finally become friends.

Nanea is also worried that her older brother David will enlist as soon as he turns 18 in May. David does a lot of volunteer work for Lieutenant Gregory, but wants to do more for the war effort. Older sister Mary Lou, 15, also does volunteer work for the war, and is never without her knitting, making needed items for soldiers.

Nanea comes up with the idea of forming the Honolulu Helpers, a club to help the war effort for kids
her age. Volunteers would do things like collecting bottles, babysitting so mothers could take first-aid classes, working in Victory Gardens, baking cookies, serving meals, and maybe even helping out in hospitals. But despite school, friends, and the Honolulu Helpers, Nanea still worries about her brother, the night time air raid drills, and the possibility of losing her beloved dog Mele again.

She is so afraid of losing Mele, that Nanea keeps her close by except during school. One day, as she is playing some records in her room, Nanea notices that Mele is moving to the music. Naturally, Nanea decides to teach her to hula, which, thanks to some tasty cookies, Mele picks up quite quickly. Later, at the USO show, the soldiers is so entertained by her hula dancing dog, that Nanea comes up with an idea of how to bring Mele to the soldiers in the hospital, who couldn't come to the show. But how to do that if dogs and kids aren't allowed in hospitals? Nanea enlists the help of Lieutenant Gregory, maybe he can convince the hospital to find a way.

Meanwhile, Nanea's class is falling behind with war stamp purchases, and it looks like there will be no Minuteman flag for them. But their teacher, Miss Smith, has a surprise guest come in a give them a pep talk. Will that help?

When you read an American Girl story, it's a safe bet that nothing too awful or scary is going to happen. They essentially present the life of a 9 year-old girl during a period of change and focus on how main character adjusts to those changes. There is lots of historical information introduced along the way, and the Nanea books are no different. Kirby Larson, who has had plenty of experience researching and writing historical fiction for young readers, has written the first two books, Growing Up with Aloha and this one.

I thought Hula on the Home Front was a well written work, that easily carried over from the first book and increased our understanding of what it was like being a 9 year-old at that time and place. Nanea is a sweet, generous character, but like all girls at some point, she also has to deal with feelings of jealousy and learn how to gracefully accept the new girl in her life, even as she misses her old friend. But Nanea also must deal with other big changes that impact her life - her father is often away from home working double shifts, while her mother helps out at the Red Cross. Then there is rationing, blackout curtains, and the Dogs for Defense program. Would Dogs for Defense want Mele? Could Nanea part with her beloved dog?

I do think it would be nice if more about Lily's family, who happen to be Japanese, were also included, especially given what was happening in the US at the time. Larson does introduce the internment of Japanese Americans on the West Coast, but doesn't really go into any detail about it. Could there be a book about Lily in the works?

Nanea is a nice addition to the WWII American Girl books, though I'm sorry they won't be publishing as many different ones as they did with the original historical characters. My kids, at home and in school, really loved reading those books and most never even owned a doll.

A lot of Hula on the Home Front does presuppose that the reader has read the first book where most of information about Hawaiian life and culture was given. There is still some given here, along with Hawaiian words with pronunciation and meaning found at the back of the book. Readers also do learn more about the meanings behind the movements of hula dancing, and its purpose.

As always, do read the section Inside Nanea's World for more information about war stamps, clubs formed by kids and other war time efforts. Though not a nice as the earlier American Girl stories, it is still helpful.

Hula on the Home Front will please AG fans, as well as those who like WWII history.

This book is recommended for readers age 8+
This book was purchased for my personal library.