A Change of Heart by Alice Walsh, art by Erin Bennett Banks 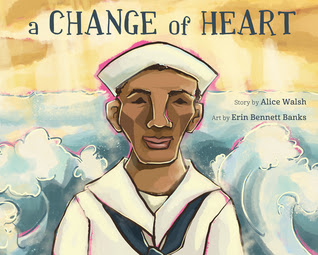 This is the story of a young African American hero, Lanier Phillips, who survived the sinking of his ship, the USS Truxtun, caused by a storm off the coast of Newfoundland.

To help readers understand Lanier, Walsh begins his story with his childhood. He grew up in Georgia, in the 1930s, living under the constant threat of the Ku Klux Klan and Jim Crow laws. Watching the homes, schools, and barns of his black neighbors being burned to the ground, barred from enjoying the same privileges as white people, and always fearing for his life, bitterness and resentment grew inside Lanier.

When the United States entered WWII, Lanier decided to join the Navy in the hope of escaping racism. Sadly, he discovered that life in the Navy wasn't any different than life back in Georgia. Black sailors were given separate sleeping quarters from the white sailors, and were required to eat their meals standing up in the pantry. Forbidden from eating in the same mess hall as the white sailors, Lanier was also required to serve them their meals and wash the dishes, do their laundry, and shine their shoes. Bitterness and resentment were eating him up.

Then, on February 18, 1942, the USS Truxtun ran into a fierce winter storm, colliding with the jagged, steep cliffs off Newfoundland. As the ship began to sink, lifeboats full of white sailors tried to make it to land in the storm, but most of the boats didn't make it. Finally, it was the time for the black sailors to try to reach land, but the boats were gone and all they had were rafts. Lanier had to quickly decide to go or stay. Would black soldiers be welcomed by the residents, or would they do something else to them?

In the end, Lanier climbed into a raft that capsized, throwing him in the sea. Lanier made it to the shore, and collapsed from exhaustion. When he woke up, Lanier discovered he was in Newfoundland, where he was taken in and nursed back to health by a local woman, Violet Pike. Many of the people who helped the sailors from the USS Truxtun had never seen a black man before, and they also didn't seem to have any of the prejudices he was so accustomed to. In fact, he was treated with respect and dignity by his rescuers. When it came time to leave their home, Lanier felt that because of the kindness he had experienced, he had lost the bitterness and resentment that had always been with him.

A Change of Heart almost sounds like it should be someone's idea of historical fiction depicting the transformation of an African American man when he finally treated him with love, respect, and compassion after living a life of discrimination and fear because of the color of his skin. And yet, it is a true story. Lanier Phillips always considered his experience with the Newfoundlanders the catalyst that changed his life. Lanier went on to have a successful career in the Navy as a sonar technician, and also became a Civil Rights pioneer with Martin Luther King, Jr.

A Change of Heart is a heartwarming, inspiring picture book for older readers that palpably depicts the racism and fear of Lanier's early life in contrast to the way he was treated in Newfoundland, and shows how one experience can really help a person to see things differently. Adding to this uplifting story are the oil painted illustrations done in Erin Bennett Banks' signature angular style.

Be sure to read the About Lanier Phillips at the back of the book to learn more about this remarkable man.

This book is recommended for readers age 7+
This book was purchased for my personal library
Posted by Alex at 10:26 AM