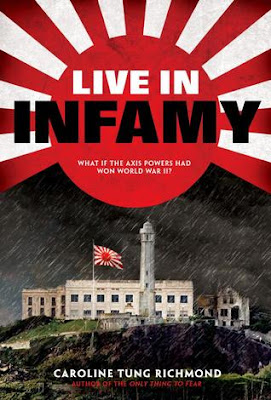 In Live in Infamy, Richmond takes the reader to the Western American Territory (WAT). where they meet Ren Cabot, a 16 year-old Chinese American whose Chinese mother was in the resistance and executed five years earlier. Since then, Ren and his father have worked together in the family's tailoring and cobbling business. A resistance movement still exists in the WAT but now essays by someone known only as the Viper are circulating and causing unrest among the people, and especially ruling Crown Prince Katsura, who wants nothing more than the catch the Viper. And no one suspects that Ren is the Viper, including his father, Paul Cabot, and cousin Marty.

Paul Cabot has recently been summoned to Fort Tomogashima, also called the Fortress, to help with sewing uniforms for an upcoming Joint Prosperity Ball. But one night, Marty brings him home with a badly injured hand, and Ren discovers they are both in the resistance. It is decided that Ren will take his father's place in the Fortress, where two other resistance members are already embedded.

Once inside the Fortress, the plan is to kidnap the Crown Prince's daughter, Aiko, during the ball, and take her to Alcatraz. Marty has intel that there are prisoners being held there, and when Ren learns his mother might be one of them, the mission becomes personal. But it is more than just about rescuing prisoners. Alcatraz is also being used as a laboratory for experiments with Anomalies.

Before the war, the Nazis had been involved in genetic testing in their concentration camps. The result was super soldiers called Anomalies, each of whom has a particular super human ability. Used by both the EAT and the WAT, the number of Anomalies has been dwindling quickly, and need to be replaced. More testing has resulted in a genetic breakthrough called V2, a joint effort of the Empire and the Nazis. The Joint Properity Ball is a chance to deliver V2 to Alcatraz while everyone's attention of focused elsewhere. But the resistance also really wants that V2 and the fifteen remaining Anomalies in Alcatraz.

At the Fortress, Ren also discovers that the Viper's essay's against the Empire are a focus of the Crown Prince's anger, so much so that he is willing to, and does, execute anyone caught with a copy of an essay - and copies are circulating widely. Marty and the resistance have come up with a wild, convoluted plan, but if the mission fails, Ren's cover could easily be blown.

Live in Infamy is not just a dramatic companion to The Only Thing to Fear, it is also a worthy one, and I think Richmond has really honed her writing chops for this second novel. She has included just enough twists and turns to make the story interesting, exciting, and suspenseful but not so much that the reader has trouble following the plot - and the best part is that it is a stand alone novel. Which means that if you missed reading The Only Thing to Fear, that's OK, although you might want to read it as well.

I thought Ren was a nicely developed character, one whose anger at the injustice and treatment of racially different and racially mixed people is totally justified. Other characters, like Marty, Mr. Cabot, and even Greta Plank, who plays a large part in Ren's time within the Fortress, aren't quite as developed as I would have liked them to be given their roles in the story's plot, but I don't think that diminishes the overall enjoyment of the novel.

I should also mention that there are some violent scenes so this book may not appeal to more sensitive readers.

I personally found reading Live in Infamy an intriguing alternative history of WWII, particularly at this moment in time. Richmond tackles race and biracial themes as well as political persecution, and the role of the resistance. These are themes readers find in books about WWII, but they are also once again coming to the surface in today's world, so although this is an alternative history, it will no doubt resonate with today's readers.

This book is recommended for readers age 12+
This book was an ARC received from the publisher, Scholastic Press
Posted by Alex at 12:41 PM