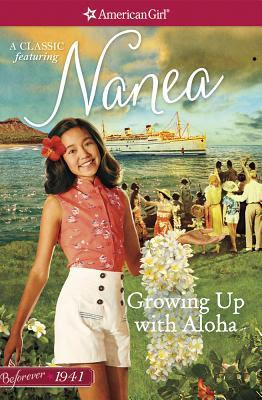 By the time Mattel rebranded the historical dolls from the American Girls collection, my Kiddo’s doll days were behind her, so I didn’t really pay attention to what was going on with any of these new dolls until I read that Molly, the WWII girl on the home front, was being retired. Molly was the fun favorite in our house, and we were sad to see her.

Now, however, there’s a new WWII girl in the American Girls collection and her name is Nanea Mitchell, a 9 year old girl who lives on the island of Oahu in Hawaii. She has two older siblings, a sister named Mary Lou, 15, and a brother named David, 17. Their mother was born on the island and is Hawaiian, and their dad came from Oregon and is white.

It’s 1941 and Nanea would like her parents to stop treating her like a baby and give her more responsibility. With the help of her friends, Lily, who is Japanese, and Donna, who is from California, Nanea decides to enter a contest that requires contestants to do a number of nice things for others.

In the first few chapters of Growing Up with Aloha, readers see that Nanea’s life is pretty much what you would expect - there’s school, friends, her little dog Mele, but there are also hula lessons with her grandmother, practicing for the big USO Christmas show, and making lei’s to be sold on Boat Day - the day ships full of tourist arrived in Hawaii. Luckily, there are also a few opportunities for Nanea to do some nice things for others.

But on December 7, 1941, Pearl Harbor is attacked and everything changes overnight. Nanea’s dad, who works in Pearl Harbor’s shipyard, and Richard, a Boy Scout with first aid training, both leave immediately to see what they can do to help. Everyone is scared, and there are all kinds of rumors about more attacks coming, and to make thing more difficult for the people, the radios are knocked offline. And then, Nanea realizes that her little Mele is missing.

Lily’s father is immediately taken into custody by two FBI men because he is Japanese and Lily's anger and fear cause her to suddenly have trouble being friends with Nanea and Donna.

Once war is declared, it doesn’t take long for the women of Oahu to mobilize for the war effort, and despite missing her father, brother and dog, and despite the changes war brings, it is an opportunity for Nanea to prove just how responsible she can be. Will she succeed in accomplishing the requirements of the contest in time, though?

This is a first book (so far, there are three) and so there’s lots of introductory information in it, which, at times, make the storyline it a little awkward, but it’s a very interesting look at the impact the bombing of Pearl Harbor had on the people of Oahu as seen through the eyes of a 9 year old girl.

Growing Up with Aloha also contains a lot of interesting information about Hawaiian culture and life, and there is a liberal sprinkling of Hawaiian words used (there’s a glossary with pronunciation help in the back).

Growing Up with Aloha was written by Kirby Larson, no stranger to middle grade WWII books (see my reviews of Liberty, Dash and Duke). I found this to be every bit as satisfying, readable, and informative novel as Larson's other historical fiction.

The word Aloha is defined in the glossary as meaning hello, goodbye, love, compassion, and it does mean those things, but it is more than that. The school that Nanea and her friends go to is named after Queen Liliuokalani (1838-1917), Hawaii’s first queen and last monarch and who is credited with saying that Aloha Spirit “… is hear what is not said, to see what cannot be seen, and to know the unknowable.” As you read Growing Up with Aloha, you’ll notice here are many examples of Aloha Spirit in the book as Nanea herself comes to understand it better.

And do read Inside Nanea's World at the end of the book for more background information about the effects the bombing of Pearl Harbor had on her and the other Hawaiian people.

This book is recommended for readers age 8+
This book was purchased for my personal library
Posted by Alex at 10:54 AM