Sink or Swim: A Novel of World War II by Steve Watkins 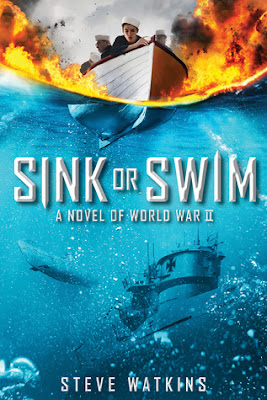 Immediately after the bombing of Pearl Harbor, 17 year-old Danny Graham joins the navy. But before he leaves for boot camp, he and his brother Colton, 12, are out fishing one day when a German U-boot suddenly surfaces, injuring Danny and putting him in a coma.

Angry at the Germans for what happened to his brother, and feeling like there is nothing he can do, Colton decides to take Danny's enlistment papers and take his brother's place in the Navy. Tall for his age, Colton doesn't really look 17, but the country was desperate for fighting men and didn't look that closely at him, although different people do question his age.

Colton, now called Danny, gets through boot camp, and even manages to impress his company commander with his knowledge of knot tying. Along the way, Colton makes two good friends, Josef Straub, legally in the Navy, and Woody, a 15 year old who also lied about his age in order to enlist.  After graduating from boot camp, he is sent to Miami for subchaser training along with Straub and Woody. Subchasing was the job he requested in order to pay the Germans back for what they did to the real Danny.

The three friends are eventually deployed on a patrol craft, whose job is to escort convoys of merchant ships up and down the eastern seaboard, looking for U-boats and wolf packs (groups of submarines), and attacking them before they could attack the convoy. Later, Colton's patrol craft is assigned to escort a convoy in the North Atlantic during the Battle for the Atlantic. Conditions in the North Atlantic are terrible, mostly because of the freezing weather and rough seas, but eventually a wolf pack attacks, and Colton's ship is sunk. A handful of survivors find themselves in the North Atlantic in a lifeboat surrounded by sharks for a number of weeks. Finally, they are rescued along with some captured Germans, and Colton finds himself in a New York City hospital, recovering from a serious leg wound. And then his mother, who has had no idea where her son was or what he had done, shows up...

Sink or Swim is definitely not a character driven story. It is, however, a real action-packed novel that gives detailed realistic descriptions about everything Colton experiences in the Navy. And while this may sound like the exciting Navy adventures of a 12 year-old, there is enough truth in Colton's story to show the other side of war - death, destruction, fighting, and the fact that the Germans they run into are just young teenage boys, too.

I did think that Watkins did a great job of maintaining a certain innocence in Colton. He is, really, just a seventh grader when he joins up. Feeling a tinge of guilt that his mom doesn't know where he is and what he's doing, he dutifully sends home his pay each month, sans $1.00 for himself. Compare that to his friend Woody, who spends it as quickly as he gets it.

Although this isn't a character driven novel, I did like the cast of characters that Watkins put Colton in touch with. Sometimes they could be a bit nasty to him until he proved himself, but for the most part they were a pretty nice bunch of men. It was refreshing to read about men who didn't need to feed their manly egos in war for a change. And I think that helps make this a much more appealing story for middle grade readers.

Watkins includes a nice glossary of Navy terms and of different events, like the Battle for the Atlantic, that might not be familiar to all readers. He clearly did a good deal of research for Colton's story, and has woven in lots of historically accurate facts that make this book so interesting to read. And readers may be surprised to learn in the Author's Note that Colton's story is based on the true-life story of a boy named Calvin Graham. Watkins includes a number of books and articles he read while writing Sink or Swim, including two about Calvin. One of them, "The Boy Who Became a World War II Veteran at 13 Years Old" can be read online.

Sink or Swim is an exciting story that should appeal to WWII buffs, history buffs, and the fast pacing makes it particularly appealing for reluctant readers.

This book is recommended for readers age 9+
This book was an ARC sent to me by the publisher, Scholastic Press
Posted by Alex at 10:16 AM