Ranger in Time: D-Day: Battle on the Beach by Kate Messner, illustrated by Kelly McMorris 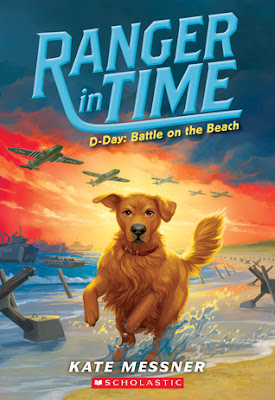 This is the 7th Ranger in Time novel in this series, but I have to confess, it is the first one I've read. The overall premise is simple: Ranger is a golden retriever that has been trained as a search-and-rescue dog but has failed to pass the official test. It seems he keeps getting distracted by squirrels. Ranger lives with Luke and his sister Sadie. One day, while playing in the garden with Luke, Ranger finds a mysterious first aid kit complete with a strap that can go around his neck. Whenever the first aid kit begins to hum, Ranger knows that somewhere, someone is in trouble, and once he has the kit around his neck, Ranger will be transported through time to help whoever needs him.

This time Ranger is transported to Normandy Beach just as the D-Day invasion is beginning. Walt Burrell, an African American soldier in the 320th Barrage Balloon Battalion, is also at Normandy Beach, packed tightly in a landing craft waiting to storm the beach. As part of the 320th, Walt's job is to hoist up the giant barrage balloons once the beach has been secured so that enemy planes can't fly over and bomb the American soldiers.

Meanwhile, Leo Rubinstein is living on a farm just beyond Normandy Beach. Leo is going by the name Henri Blanc to hide his Jewish identity from the Nazis. On the morning of the invasion, the Blanc family prepares to take shelter from the constant barrage of bombs and gunfire. But Leo gets caught in a bomb hit in the house while looking for his sister's cat.

Ranger finds himself on Normandy Beach next to Walt, who figures they brought a dog along to sniff out landmines. At first, Ranger doesn't know why he was sent to this chaotic place, but when Walt realizes his friend Jackson didn't make it to the beach, man and dog race back to the water to rescue Jackson and, thanks to Ranger, two other men.

But even after all that, Ranger knows his work isn't done. Dodging gunfire and avoiding Nazis soldiers, Ranger makes his way to the Blanc farm, where he finds Leo, who is unhurt but knocked out. But when his sister's cat runs away towards the beach, Leo follows and there is nothing Ranger can do to stop him.

Back on the beach, it is still absolute mayhem, with gunfire, shelling, and bombs going off, and then there are the landmines all over the area. But Ranger isn't trained to sniff out landmines. Can Ranger, Walt, and Leo survive the allied invasion?

I've always enjoyed Kate Messner's other books and I really enjoyed reading this one. I found the writing to be clear, with straightforward descriptions, realistic characters and lots of excitement. I think Messner has captured the feeling of finding oneself in the midst of a very scary, very chaotic situation, whether man, boy, or dog.

Ranger in Time is the ideal chapter book for all readers, but the excitement of a time traveling dog and the places he finds himself in may entice even the most reluctant readers. To her credit, Messner makes sure Ranger is always a dog - he doesn't think in words, but goes by his instincts and what he recognizes from his training, making it an even more interesting story. Sometimes, even Ranger doesn't know why he is somewhere, until trouble presents itself.

There is lots of historical fact woven into this D-Day story, and Messner has included a list of sources she used, as well as a list of books for further reading. And while Walt is a fictional character, he is based on a real life hero of the 320th Barrage Balloon Battalion named William Dabney. You can find out all about him and all the other the research Kate Messner did for D-Day: Battle on the Beach in the back matter or you can read it online HERE.