Torpedoed! A World War II Story of a Sinking Passenger Ship and Two Children's Survival at Sea by Cheryl Mullenbach 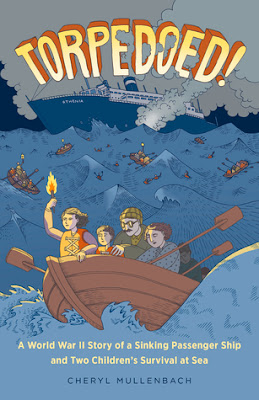 When we think of ships being torpedoed in the Atlantic Ocean during WWII, we generally think of warships being sunk by Nazi submarines, or U-boats. In fact, the first ship sunk after England declared war on Germany on September 3, 1939 was a British passenger ship, the S.S. Athenia, attacked less then 10 hours later.

Mullenbach introduces her readers to the events that led to the sinking of the Athenia and the aftermath mainly through the experiences of two teens who were on the ship and survived. Russell Park, 11, lived in Philadelphia but was already an experienced traveler, who loved history and was fascinated by how things worked. Florence Kelly, 14, lived in Cleveland, loved big band music and going to the movies with her best friend on Saturdays. They were “…two ordinary American kids who weren’t thinking about the frightening actions of world leaders…” (pg 8) as they prepared for their European vacations in May 1939.

And though their summer vacations were cut short by world events, they had been wonderful. But, when Hitler invaded Poland on September 1,1939, Americans in Europe scrambled to book passage, hoping to return home before war began. Through a combination of circumstances, Russell, along with his parents, and Florence and her mother ended up on the same ship sailing home.  Both Russell and Florence were looking forward to returning home to family, friends, and the new school year.

There were 1,102 passengers and 316 crew on board the Athenia when the ship began her journey across the Atlantic Ocean. At the same time, a German U-boat was also in the Atlantic, commanded by Oberleutnant Fritz Julius Lempe, and searching for ships carrying troops and war materials, which is what he supposedly thought the Athenia was doing when he gave the order to torpedo it.

Mullenbach covers a lot of ground in Torpedoed!  Placing Florence and Russell at the center of events, she manages to fit in a lot of historical information about what was happening in prewar Europe, as well as giving readers an up-close and personal account of the harrowing sinking and rescue of the Athenia’s survivors (128 people did not survive). She even follows up with information about the commander who mistakenly (?) bombed the Athenia. Mullenbach carefully crafts a detailed narrative of this ill-fated journey that is both gripping and so terrifying at times and completely accessible for young readers. And ironically, while their paths crossed several times, Florence and Russell never actually met before, during, or after the Athenia was sunk.

Torpedoed! is a story that will certainly appeal to everyone, but especially to young readers interested in history, WWII, and nonfiction survivor accounts. Mullenbach has also included lots of photographs and maps to help orient readers, as well as a Time Line of events, Notes and a Bibliography for those interested in more information.

Interestingly, the Athenia has recently been in the news once again. BBC reported that the remains of the ship may possibly have been discovered a few hundred miles from Ireland, on Rockall Bank. You can read about it HERE 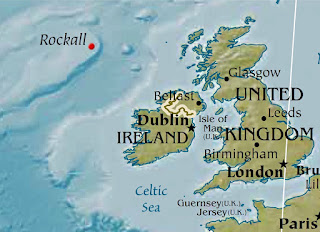 This book is recommended for readers age 10+
This book was sent to me by the publisher, Chicago Review Press
Posted by Alex at 11:09 AM