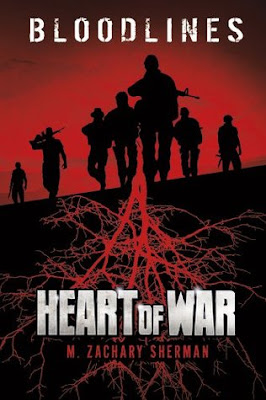 Bloodlines: Heart of War is the story of the Donovans, an American family, and consists of eight stories that cover four generations of that family as they serve in five different American wars.

Each story followers one family member at a particular time in the war they are fighting in, beginning with WWII and Private First Class Michael Donovan, a parachutist in the U.S. Army 2nd Battalion, 506th Parachute Infantry Regiment AKA Dog Company. Donovan parachutes behind enemy lines in France, in order to help secure a base of operations in preparation for the D-Day invasion in Normandy, France. Of course, nothing is as easy as it sounds, and Donovan lands without his equipment bag, no weapon, and a German patrol passing by. And his story just gets scarier and more dangerous from there, but ultimately, courage and determination guide his actions to the end of the mission.

The second story is also set in WWII and is an exciting saboteur tale. Michael Donovan’s brother, First Lieutenant Aaron Donovan is part of the U.S. Army’s Office of Strategic Services. His mission is to board a German submarine located in Gilleleje, Denmark, sabotage it so that the Germans will have to evacuate the sub, and while that is happening, Donovan and his companion are to steal the new codebooks for decoding the latest Enigma codes. It’s a daring mission, not everything goes a planned, but again Donovan strength and courage win the day.

A third Donovan brother is a U.S. Marine Captain Everett Donovan during the Korean War. Captain Donovan finds himself the only survivor of…what? He couldn’t remember, but he can figure out that he is in North Korea and the temperature is 35° below zero. With the bayonet of a Korean sniper aimed at him, Donovan suddenly remembers his mission - he and his Counterintelligence Marines were supposed to scout the area known as Toktong Pass, making sure it is clear for U.S. and U.N. Forces to advance through in the morning. But this Korean sniper had a real surprise for Captain Donovan.

In this fourth story, we meet the Donovan brothers cousin, Private First Class Tony Donovan of the U.S. Army’s 249th Engineer Battalion, who is also stationed in Korea. When a C-119 cargo plane crashes behind enemy with Donovan and his men on it, they know they had to get out of that area and back to safety as quickly a possible. But first they had to try and repair a jeep they were carrying. And even at that, getting back to safety provea to be a dangerous trek, especially when a North Korean tank gets the jeep full of soldiers in it’s sights. How will they ever survive a hit from a tank?

Next is the story of Everett Donovan’s son, Lieutenant Verner Donovan, Everett’s son, a pilot in the VF-96 “Fighting Falcons” Squadron, part of the U.S. Navy. Verner, known as the “Candy Man” because of his fondness for chocolate, is stationed on a aircraft carrier in Vietnam. When he and his RIO (radio intercept officer) Blem receive a radio transmission from Marine recon unit Razor Two requesting air support after having stumbled into a Vietcong training camp, the two men spring into action. Locating the Marines, they soon discover they aren’t the only ones in the air - so are the enemy and the two men are forced to parachute out of the plane. Now, it is the Candy Man and Blem who need help. Will they make it out of the Vietcong jungle?

Also in Vietnam is Captain Anne Donovan, a U.S. Army nurse, and Verner’s sister.  Finding herself in a M.A.S.H. unit, providing medical care to badly wounded and dying soldiers, Anne has something to prove - that she has what it takes to be a doctor some day. When she finds herself assisting a doctor during the Battle of Hamburger Hill, she learns the most valuable lesson of all - how to keep her emotions distanced from the carnage all around her in order to be strong for the soldiers who need her.

Lieutenant Commander Lester Donovan, Verner’s son and Anne’s nephew, is a U.S. Navy Seal stationed in Kandahar, Afghanistan. Lester was a by-the-book officer, but the men he commanded wanted to see a little flexibility when needed. When the helicopter carrying Lester, his men and a Taliban prisoner is shot out of the sky, Donovan knows he has a difficult  choice to make - obey orders or defy them and search for his two missing men, taken prisoner by the Taliban and hidden in a dark cave. But which cave? There are so many used by the Taliban.

This last story also features Lieutenant Commander Lester Donovan, now serving in Iraq. Based on information given to them by Iraqi Police Chief Hakedam, a supporter of Saddam Hussein’s old ruling party, Donovan, two of his men and a CIA agent hope to capture a black marketer and terrorist, Abdul Kasieem, whose stronghold is camouflaged as a goat farm near the Syrian border, and which contains an underground bunker loaded with weapons. But has the Police Chief played the Americans so that they would get rid of Kasieem and he, Hakedam, could be the only black marketer in town?

Bloodlines: Hear of War is a very well-done collection of short stories for middle grade readers, many of who really like these types of military tales. There are lots of details about the conflicts that the Donovans find themselves fighting in, but they are not terribly graphic, though they are realistic. And even though I’m not a fan of combat stories, I did find them somewhat interesting. I like the way the author connected the family to each other in the stories. I know there are lots of military families like the Donovans, who will also find this and interesting book.

There not much background as to what each war is about within the stories, however, there is a brief description of each of these U.S. Military Conflicts at the back of the book. I would have liked to see suggestions for further reading as well, but I did read an ARC so many the finished book has these things. Maybe kids who read and enjoy Bloodlines: Heart of War will be inspired to seek out more information about each conflict on their own.