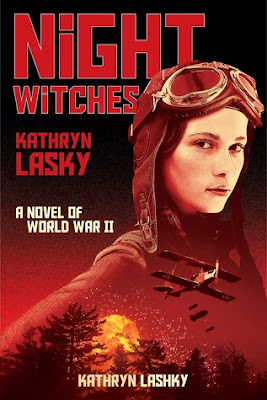 It 1941, and the Nazi have just begun Operation Barbarossa, their invasion of Russia. Nazi soldier have surrounded Stalingrad on three sides (the fourth side is the Volga River), making it impossible for people and supplies to get in or out of the city. After her mother was killed by a Nazi sniper, Valentina Petrovna Baskova, or Valya, 16, sees no reason for not joining her sister Tatyana as a Night Witch, a fighter pilot with the 588th Regiment. Her father, a pilot, hasn't been heard from since he left to fight, and is MIA.

With the help of Yuri, an old classmate now turned Russian sniper, Valya sets off for the river where ferries are rumored to be taking people across in the morning. Unfortunately, so many people are fleeing Stalingrad, that Valya is unable to get on the ferry, and ends up unwillingly manning antiaircraft guns in Trench 301 run by another school friend, Anna.

Valya is stuck fighting in the Trench 301, always looking up into the night sky and wondering if one the Night Witches she sees could be her sister, making her long to be part of it all the more. But no one in the Trench 301 really believes a 16 year old can fly a plane. Finally, it is again rumored that civilians will be allowed to cross it. Valya makes it to the docks, but just as she is about to board, Yuri shows up and pulls her away, saving her life.

It's in the dead of winter that Valya finally makes it across the frozen river, escorted by Yuri, who seems to know exactly where the secreted 588th Regiment is located. At last, Valya makes it to Night Witches, and finds her sister Tatyana. And despite all she has already been through, her real adventure as a Night Witch has only just begun.

Night Witches is a pretty exciting, fast-paced story with perhaps a little poetic license.  Valya is a strong female main character, who exhibits plenty of level-headed self-confidence even in a dangerous situation, yet retains the impulsiveness of her age.  I have to admit, however, her jealousy and the way she constantly compared herself to her older sister annoyed me (um, too close to home, perhaps?). Still, the very strong bond between the sisters which becomes all the more evident when Tatyana's plane is shot down and Valya refuses to believe she could be dead and vows to find her.

The story of the Night Witches is not a familiar story to today's readers, and Lasky's book certainly has a great deal of appeal going for it. Since most WWII books for young readers focus on the home front, the war in European theater, and to a lesser extent, the war in the Pacific theater, Lasky has included some information as part of the narrative to give readers some sense of context. But, the use of female fighter pilots was such an unusual phenomenon in WWII, that I would have liked Back Matter with some addition information about the Night Witches and perhaps suggestions for further reading.

While there is some strong language, and some of the fighting is a bit graphic, especially while Valya is fighting in Trench 301, it isn't overly done. My first introduction to Russia's women pilots was in an old book called Comrades of the Air (1942) by Dorothy Carter, a story about a female pilot in the ATA who ferries a plane to Russia, so it is nice to read a book from a Russian perspective.

Did you think that Valya was too young to fly? Here is an interesting article about Russia's Night Witches from The Atlantic magazine about the real women pilots who actually did range in age from 17 to 26.

I really enjoyed this book but one thing bothered me. At some point, Valya refers to the popular slogan in England "Keep Calm and Carry On." This was one of three posters the government issued to boost morale. But it was only supposed to be used in case of invasion, which never happened. For more about this, see my post of 2012 Keep Calm and (fill in the blank).

Since Night Witches is a YA novel, may I recommend two works of nonfiction as supplements for those interested in these brave pilots that were recommended to me by Gwen Katz, author of the upcoming novel Among the Red Stars (also about the Night Witches. They are A Dance with Death: Soviet Airwomen in WWII by Anne Noggle, published by Texas A&M University Press, 1994, 2007; and Wings, Women, and War: Soviet Airwomen in World War II Combat by Reina Pennington, University Press of Kansas, 2007.
Posted by Alex at 10:58 AM