An Eagle in the Snow by Michael Morpurgo 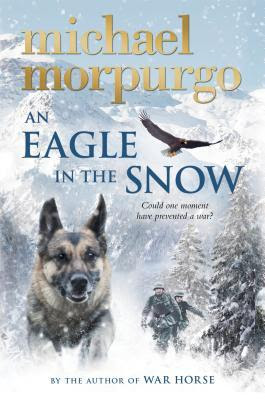 After spending the night in a shelter, Barney, 10, and his mother return home to find their house on Mulberry Street reduced to rubble, as result of the bombing of Coventry. Even knowing all was lost, Barney tries to look through the remains to find his beloved toy trains, but is stopped by a Civil Defense Warden.

Realizing that all has been lost, Barney's mother decides to relocate to Cornwall, spending the rest of the war living with her sister. Barney's dad is away in the army, stationed in Africa with the Royal Engineers. Taking the 11:50 train to London, mother and son are soon joined in their compartment by a stranger. But almost immediately, Barney realizes that the man looks very familiar. Sure enough, the stranger is none other than the Civil Defense Warden who had carried Barney out of the rubble of his destroyed home. After they start chatting, it turns out the the man had also grown up on Mulberry Street, in the orphanage that used to be there.

Looking out the window, Barney spots a plane in the air, which the stranger immediately realizes is a German Messerschmitt, pushing Barney and his mother to the floor and covering them with his own body. After the train is attacked, the conductor drives it into a tunnel for safety. Suddenly, they are plunged into darkness, and Barney, who has a severe fear of darkness, begins to feel like it is closing in on him.

To take Barney's mind off the darkness and pass the time, the stranger starts to tell the story of his life-long friend Billy Byron and their experiences together in World War I. After leaving the orphanage, the two friends had gone to work in a hotel, stoking the boiler there. Not much liking it, they decided to join the British Army and have some adventures. But it wasn't long before the war began and they sent to the front lines to fight. On their way there, Billy saw a little girl sitting by the side of the road, starving and in need of medical care. Picking her up, he carried her all the way to a field hospital against his sergeant's orders. All he knew about her was that her name was Christine, but her face haunted him all through the war.

Billy was a brave soldier, and by the end of the war he had been award a number of medals, including the Victoria Cross for valor in the face of the enemy. But all the killing and wounding of men really got to Billy, so at the end of the war, after the intense Battle of Marcoing, he allowed a German soldier to simply leave and return home to Germany.

Billy also returned home, haunted by the war. He never forgot Christine, and returned to Europe to try to find her. Eventually, he does, and now a grown woman, they two marry and settle down in Coventry. All goes well for them until Barney suddenly recognizes the German soldier he allowed to go free while watching a newsreel about the German Führer Adolf Hitler.

Was it possible that Billy was responsible for Hitler's rise to power and starting the Second World War? Billy needs to know

An Eagle in the Snow is a story that is based on speculation and reality with Morpurgo giving it all his own spin, and a surprise ending. It's a formula that really works well for him. In this story, Billy is based on the real life experiences of a WWI soldier named Henry Tandey, and while there is still a lot of speculation over whether Henry actually spared Hitler's life, it does make for a good novel.

Told in Morpurgo's typical story within a story format, An Eagle in the Snow is actually a little slow in the beginning, but readers who stick with it will be rewarded by the end. It is, however, a short, quick novel and well worth reading. He does go into the fighting that Billy and his friend took part in but it isn't graphic, and kids will most likely pay more attention to Barney's fear of the dark then to the scenes at the front lines.

There is lots of potential for speculation in the novel and in the accounts of Henry Tandy's wartime experience, as well as hypothesizing what one might do in Billy's shoes. Fans of Michael Morpurgo will definitely want to read this new novel, as will young readers who like historical fiction.

Below is a painting that is featured in the novel, that hung on Hitler's wall at Berchestgaden, in the Bavarian Alps. Click the link to find out what part it plays in the life of Henry Tandey, Adolf Hitler, and in the novel, Billy Bryon.