The Secret Project by Jonah Winter, illustrated by Jeanette Winter 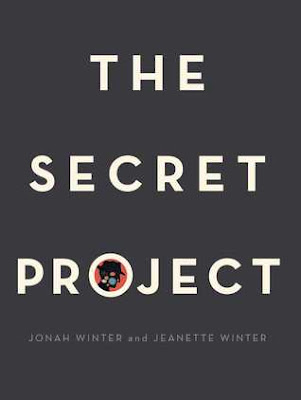 A quiet remote boys school located in the New Mexican desert suddenly receives a letter telling them that the school must evacuate the area immediately. The letter goes to explain that the school is needed for important government work.

With the school gone, the location becomes a secret, with no name or other identification. Soon, cars begin to arrive carrying scientists from all other the world, followed by other workers who are sworn to secrecy.

The scientists begin working, hoping to cut the atom, the smallest particle in the world, in half. But why? All the reader knows is that they are working on something called the Gadget, a thing that requires a lot of mathematical calculation in order to create something gigantic out of something tiny. And it is a race to get it finished before anyone else in the world does.

At the same time that the scientists are shut away in the former school building working day and night, outside ordinary desert life goes on. Until one day, the scientist pack up their Gadget and drive out to an even more deserted part of the desert. They carefully unload their project, drive away to a safe bunker in the ground, and start counting down. Suddenly, the biggest man-made blast the world had ever known fills the sky. The atomic bomb has been unleashed.

The Secret Project is a very compelling, very powerful picture books about the creation of the atomic bomb. It is never referred to by its name, the Manhattan Project, or its exact location, the Los Alamos Laboratory in New Mexico, nor are any of the scientists who worked on it named. This kind of ambiguity, not explaining what is going on, only makes the secret project feel that much more secret, sustaining the suspense of what is going on, and also adding a rather sinister tone to the over all story. Outside the building, the desert remains peaceful and serene, providing an interesting contrast to the work inside the building. The reader sees a Hopi Indian carving a Kachina doll, an unnamed artist, probably Georgia O'Keefe, painting a desert scene, and desert animals going about their business. It is a contrast that is only fully realized at the end of the book.

Author Jonah Winter has once again collaborated with his mother, illustrator Jeanette Winter, on this book. Illustrations and text compliment each other in their straightforward simplicity. The digitally rendered images are a contrast of light, bright colors reflecting the hot sunny desert, and the dark, shadowing grays inside the former school, testimony of the clandestine work going on inside.

The Secret Project is an excellent way to introduce children to the difficult topic of the atomic bomb, and, unfortunately, a book that resonates in today's world of nuclear weapons.

This book is recommended for readers age 5+
This book was purchased for my personal library
Posted by Alex at 11:32 AM