Escaping the Nazis on the Kindertransport by Emma Carlson Berne 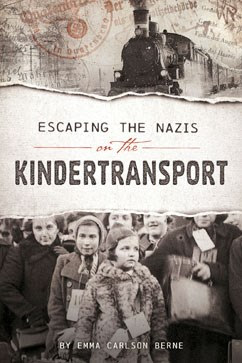 The Kindertransport was a short-lived program that rescued approximately 10,000 Jewish children in Nazi occupied Germany, Austria and Poland and Czechoslovakia between December 1938 (just three weeks after Kristallnacht, and May 1940. The children were sent to live with families in Great Britain. I have reviewed a number of books about the Kindertransport before, but most of them were novels.

In her new book, Emma Carlson Berne introduces readers to the program through the true stories of seven former Kindertransport survivors, including a detailed explanation of what was happening in Europe, especially after Kristallnacht, and how the Kindertransport program worked. The program was the brain child of British Jews and Quakers and only worked because at that time, Hitler wanted to get all Jews out of Europe. Still, It's hard to imagine parents willingly surrendering their children to strangers in the hope that they would be safe, but it just shows how dangerous Europe had become under the Nazis. It was up to the families to get their children to the transport train that would take them to the ships traveling to England, an expense difficult for Jewish parents to afford by 1938, having lost their jobs and most of their money having been confiscated by the Nazis. To make it more difficult, no parents or other family were allowed to travel with their children. For many, Berne points out, the train station would be that last time parents and children would ever see each other.

Berne than recounts the experiences of the seven children and how they became Kindertransport children. Her writing style is very interesting. She invites the reader into the book with sentences like: "We can imagine the train whistle blowing. 'All aboard,' the conductor might have yelled in German over the crowd of frightened children and weeping parents." (pg 62) Each persons recollections are told in their own words, as well, taken from interviews done when they were adults, and adding a sense of authenticity that these are true stories and not the stuff of imagination.

In addition to each person's story, Berne has included archival photographs of what Jewish life looked like in Europe before and under the Nazis and a collection of family photos each child must have taken to England with them. The whole book is set up like an old family album, including chipped, aged-looking pages.

There is extensive back matter, including a timeline, a Glossary, information about The Kindertransport Association, which you might want to check for additional information, suggestions for further reading, discussion questions, and and extensive Bibliography.

Escaping the Nazis on the Kindertransport is a well done, very well researched book. The seven stories included in it are poignant, and really bring home the feelings of desperation parents were feeling, but also the fear of the child suddenly being separated from their family, and not always being old enough to understand what was happening.

This is a valuable teaching resource for classes studying the WWII and Holocaust. Pair it with some of the excellent novels that have been written about the Kindertransport for a really in-depth, well- rounded sense of how the events of the time impacted children.

This book is recommended for readers age 8+
This book was an EARC received from NetGalley
Posted by Alex at 11:32 AM