Stones on a Grave by Kathy Kacer 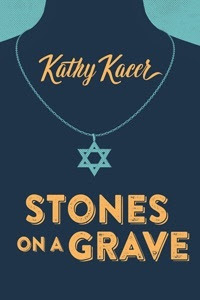 It's June 1964 and Sara Barry, 18, has been living at the Benevolent Home for Necessitous Girls ever since she was a baby.  But now, after a fire completely destroys the building, it is time for Sara to strike out on her own.  Before she does that, Mrs. Hazelton, the home's matron, decides it is time for Sara to discover who she is.  All she has to give Sara is a certificate from the United Nations Relief and Rehabilitation Administration, a doctor's note written in a foreign language and a small Star of David on a chain.

It seems that Sara's mother, whose name was Karen Frankel,  had been in Auschwitz, had actually survived until the camp was liberated, but then succumbed to TB in a DP or displaced persons camp shortly afterwards.  Sara was born in Germany soon after the war ended, and sent to the home in Canada.  Her Jewish background is a complete surprise to her.

Now, armed with the $138.00 gift from Mrs. Hazelton and her own savings from her waitress job, Sara decides to go to Germany and try to find the doctor who signed the certificate that sent her to Canada.  Perhaps he has some information about her mother and father.

Arriving in Germany, Sara immediately heads to Föhrenwald, site of the former DP camp and easily locates Dr. Gunther Pearlman, the doctor who had certified her healthy to travel, even though she actually had TB as well.  But as soon as the doctor sees the papers she has with her, he turns on her and tells Sara to get out and go back to Canada, he has no information that would help her.  Dr. Pearlman does make a one night reservation at a small inn run by an older lady named Frau Klein, and asks his helper, Peter, a boy around the same age as Sara, to escort her there.

Dr. Pearlman may want Sara to leave the next day, but Sara has other plans and with Peter's help, and Frau Klein's kindness, she decides to stay for the rest of the week.  Luckily, Peter speaks perfect English (as does Dr. Pearlman), so he can translate for her.  Sara quickly discovers that Föhrenwald is still home to many Jewish survivors and their children, including Frau Klein, the doctor and Peter's parents.

But uncovering information about her parents isn't easy in the country that just wants to forget about what had happened there.  Yet, perseverance does pay off and while all the loose ends are neatly tied up by the end of the novel, some of what Sara discovers is difficult for her to accept, and I have to admit, I wasn't expecting the ending to twist the way it did.

I found this is a very interesting example of a post-war historical fiction novel.  By setting it in the 1960s, Kathy Kacer shows the reader a world that wants to forget what happened, others who, like Sara, really don't know about what happened under Hitler's tyranny, even as racial prejudice is still openly practiced.  Mrs. Hazelton didn't keep Sara's Jewish identity secret because she didn't like Jews, but because she wanted to protect her from any lingering anti-Semetism.  And Luke, Sara's loser boyfriend in Canada, proves the point, with his hatred of Jews and blacks, seen in the way he goes after Sara's friend Malou.

Stone on a Grave is an emotional, insightful novel about a young woman trying to discover who she really is.  It was named a 2016 Sydney Taylor Honor Award winner in the Teen Reader category and I am happy to say that I will be interviewing Kathy Kacer as part of the Sydney Taylor Blog Tour  February 11, 2016 on my blog Randomly Reading.  You can find a complete list of winners and the blog tour schedule HERE

Be sure to read the Author's Note for more information about the aftermath of the Holocaust.

In the Benevolent Home, Sara was one of a group of girls Mrs. Hazelton considered to be her "special seven."  Like Sara, each girl is given whatever information Mrs. Hazelton has about who they really are, plus $138.00 she had put aside for them to start them on their way.   Sara's story is part of a seven book YA series called Secrets that follows each girl on their journey towards self-discovery. Each novel is written by a different author, providing a variety of stories and insights. 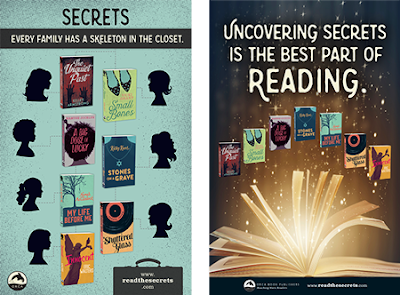