Anne Frank in the Secret Annex: Who Was Who? by The Anne Frank House 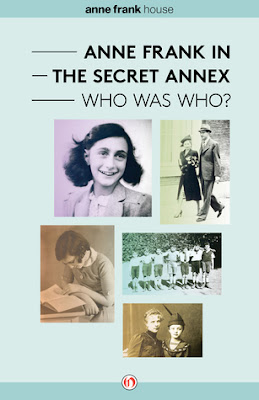 In 2005, the United Nations issued a declaration stating that January 27th would be designated as International Holocaust Remembrance Day.  It only seems fitting to remember the victims of the Holocaust with a new book
about the secret annex where Anne Frank, her family and four other people hid from the Nazis in the annex of her father's business at Prinsengracht 263 in Amsterdam for more than two years.

Anne is a young girl whose short life has resonated in the lives of so many young people since her diary was first published.  The Diary of a Young Girl.  It is a moving account of Anne's life in the Annex, in which readers discover Anne's humorous side, her mischievous side, her budding sexuality, her hopes and dreams.


But Anne wasn't alone and although she mentions names and incidents in her diary, what do we really know about the other people in the Annex?  Or the helpers on the outside?  What did the people in the annex do all day?  What did they eat? Where did their food and other needed items come from?

The decision to hide from the Nazis, to live in such close quarters for more than 2 years, from July 1942 to August 1944, couldn't have been an easy one to make and definitely requited a plan, detailed organization, and the help of trusted people who could provide them with food and other necessities.

Anne Frank in the Secret Annex: Who Was Who is a comprehensive book that brings it all together so that we may understand the risks and dangers everyone connected to Prinsengracht 263 faced on a daily basis.

The book begins with a very brief history of post WWI Germany, Adolf Hitler's rise to becoming the German chancellor in 1933, blaming the Jews for all of the country's problems.  Otto Frank immediately decided to leave Germany and settle in the Netherlands.  There he set up his business at Prinsengracht 263.  But in 1940, after Germany invaded the Netherlands, they immediately put anti-Jewish regulations in place, making life harder and harder for all Jews living there, until, in 1942, Otto Frank moved his family once again - directly into hiding.

The book continues with description of the daily routine of the hiders, food and it distribution, and other daily discomforts, how holidays and birthdays were celebrated.  Even a detailed description of the building they were hiding in.

This is followed with detailed biographies of all the people in hiding, those that helped them, other people who worked in or around Prinsengracht 263, even the cats are included.  Any one of those peripheral people could have (and may have) turned in the people in the annex to the Nazis if they became aware of their presence.

Anne Frank and her diary have held the attention of readers, young and old, since it was first published, but the publication of Anne Frank in the Secret Annex: Who Was Who? gives readers a more detailed, more rounded out picture of who each individual was, making them more human and less the shadowy people we know from the diary.

It's hard to imagine what it must have been like to be cut off from everyone and everything for more than two years, never going outside, never even breathing fresh air from an open window, and living in silence day by day.  This is an ideal book to be used in conjunction with Anne's diary as a way of introducing the Holocaust to young readers.

The book also contains an abundance of photographs, some never before published of everyone and everything related to the secret annex, including photos of all the helpers.  There are also maps, including one of the concentration camps that the hiders were sent to after being discovered, a Concise Timeline along with the Lifeline of helpers and hiders, and a useful Glossary, a list of Sources, and suggestions for further reading.

Anne Frank in the Secret Annex: Who Was Who? is available only as an ebook.

And on this 2016 International Holocaust Remembrance Day,  please take a moment today to think about all those who were victims of this tragedy, those who didn't survive as well as those who did.

This book is recommended for readers age 12+
This book was sent to me by the publisher, Open Road Media

Curious about Anne Frank in the Secret Annex: Who Was Who?  Here's an excerpt you can read:

“At a quarter to seven, the alarm clock went off in the Secret Annex. The eight occupants would get up and wash before the warehouse workers arrived at half past eight. After that, they had to keep noise to a minimum. They walked in slippers, avoided the creaking stairs, and didn’t use any running water. Coughing, sneezing, laughing, talking, or quarreling was absolutely forbidden. To kill time, the eight would spend the morning reading and studying. Some did needlework, while others prepared the next meal. Miep, working in the office on the first floor, along with Johannes, Victor, and Bep, would go upstairs to the Secret Annex to pick up the shopping list.

“It’s twelve thirty. The whole gang breathes a sigh of relief,” Anne wrote. At noon, the warehouse workers went home for lunch and the annex occupants could relax a little. The helpers from the office usually dropped in, and Jan Gies sometimes joined them. At one o’clock, they all listened to the BBC on the illegal “little baby radio” before having lunch. After the lunch break, the helpers went back downstairs and most of the occupants took naps. Anne often “used this time to write in her diary. Silence prevailed for the rest of the afternoon: Potatoes were peeled, quiet chores done for the office, and reading and studying continued, while below, the helpers worked in the office. Miep and Bep would slip out during the afternoon or after office hours to work their way through the shopping list, which usually included food, clothing, soap, and even birthday presents.

When the warehouse workers left at around half past five, Bep gave the occupants a sign. As the helpers returned to their own spouses or families, the Secret Annex came to life: Someone would grab the warehouse key and fetch the bread, typewriters were carried upstairs, potatoes were set to boil, and the cat door in the coal storage bin was opened for Peter’s cat, Mouschi. Everyone had his or her own task. After dinner, they sometimes played a game. At around nine o’clock, the occupants prepared for bed, with much shuffling of chairs and “the folding open of beds. They took turns going to the bathroom. Anne, being the youngest, went first. Fritz stayed up late studying Spanish in the office downstairs. By about midnight, all of the people in the Secret Annex would be fast asleep.

On Saturday mornings, the warehouse workers would put in half a day’s work, but in the afternoons and on Sundays, the Secret Annex occupants took time for a full sponge baths in a tub, each in his or her own favorite spot in the building. The laundry was done then, too, and the Secret Annex was scrubbed and tidied. There were businesses located in the two adjacent buildings, so during the weekends, the occupants didn’t have to be quite so cautious. But the curtains always remained closed.”

More Curious about Who Was Who?
Five anecdotes behind the faces of the Secret Annex

• While everyone was assigned chores, Peter was instructed to haul the heavy bags from the greengrocer up to the attic. On one occasion, “one of them suddenly split open and a torrent of brown beans went cascading down the stairs. It was weeks before the last beans were found, they had been wedged into every nook and cranny of the stairwell.”

• The Annex’s Romeo and Juliet: Anne Frank’s roommate and the eldest occupant of the Secret Annex, Fritz Pfeffer - the only one without family or loved one at his side - was gripped with loneliness. His evenings were filled with writing letters to his “Lotte,” his great love Charlotte Kaletta, a Catholic woman whom he was forbidden to marry due to the Nuremberg Race Laws. He relied on Miep to serve as messenger to deliver the letters where he professed that Charlotte’s love will strengthen him.

• Miep was deemed the pack mule and carrier pigeon for the eight inhabitants of the Secret Annex. “Every Saturday, she also brought along five library books, which the Secret Annex occupants eagerly looked forward to. ‘Ordinary people don’t know how much books can mean to someone who’s cooped up,’ Anne wrote.”

• After the betrayal that led to the Secret Annex’s exposure and the inhabitants’ arrest, the ladies were sent to Westerbork transit camp where they “were forced to dismantle batteries, a dirty and dangerous business. The workday began at five o’clock in the morning. Seated at long tables, the women broke open batteries in order to remove the carbon rods. Then they picked out the sticky brown mass, which contained poisonous ammonium chloride. Finally, all the components were separated for use in the arms industry.”

• When Frank Otto, Anne’s father and lone survivor, returned to the Secret Annex, he “found the rooms practically empty and abandoned. For him, that emptiness symbolized the loss of his fellow sufferers who had not returned from the camps. For this reason, Otto later decided that the Secret Annex should remain this state.”