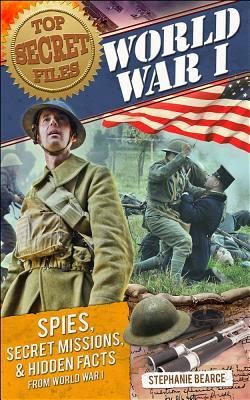 In October 2014, I reviewed a book called Top Secret Files of History: Spies, Secret Missions, & Hidden Facts from World War II.  It is such an interesting book, and I discovered all kinds of new information about the hidden workings and wartime secrets that helped end the war.   Now, the author, Stephanie Bearce has followed it up with a similar book about World War I.

Bearce has once again culled little known information about WWI and combined it with more well-known details and events in a book that will fascinate young readers.  For instance, they will read about the secret society, the Black Hand, formed by the Serbian Army for the purpose of freeing Serbia from being ruled by Austria-Hungary, which led to the assassination of Archduke Franz Ferdinand of Austria and his wife and the start of WWI.

And then, in the section on Spies, there is the prospector/mining engineer Howard Burnham, who had lost part of his leg before the war in an accident.  Working for the Allies, Harry traveled into German territory to do learn enemy troop positions.  Howard has a photographic mind and didn't need to put anything on paper.  In addition, he cleverly hid his surveying tools in his prosthetic leg and no one was ever the wiser.  Readers will also read about brave women like Nurse Edith Cavell and Nurse Marthe Cnockaert, whose professions helped them spy for the Allies.  After the war, Cnockaert went on to write spy novels.

One of my favorite stories in the Special Missions section are the dazzle ships.  Radar was unknown in WWI, and the Germans had developed their submarines or U-boat to such an extent that Allied ships were being successfully torpedoed by them.  A British naval officer named Norman Wilkinson came up with a unique way to confuse the Germans: camouflage the ships by painting the bright geometric patterns so the U-boats couldn't zero in on their position.  See what I mean:

Spies, Secret Missions & Hidden Facts from WWI is chockablock with interesting facts, people and events.  Towards the end of the war, as planes were being used more and more, the French were afraid that Paris would be bombed.  What to do?  Readers will discover the unusual solution the French come up with in this book.  And speaking of airplanes, remember the World War I flying ace, Snoopy and his foe, the Red Barron.  Well, readers will meet the read Red Barron in the section on Secret Forces.

And they will learn about some secret weapons that were used, like carrier pigeons and dogs, and Little Willie, the tank that was able to put an end to trench warfare.  How?  Here's a hint:

Like it companion book, this one is also divided into five sections: Secrets, Spies, Special Missions, Secret Weapons and Secret Forces, each packed with all kinds of interesting information, and within that, readers will find inserts with even more unusual facts.  And at the end of each of the five sections, there are activities and projects for kids to do that corresponds to the topic covered.

A Bibliography of Books and Websites is included for further exploration.  Like Bearce's book on WWII, this volume is also sure to please young history buffs, or anyone else who like a good secret.

This book is recommended for readers age 9+
This book was sent to me by the publisher, Prurock Press