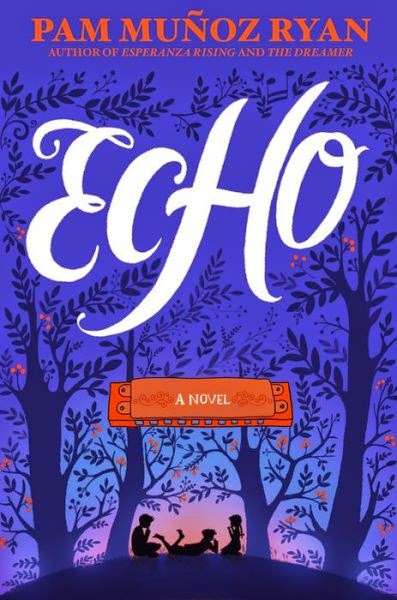 When young Otto goes missing in a German forest during a game of Hide and Seek, he meets three princesses, sisters named Eins, Zwei and Drei (One, Two and Three).  The sisters were brought to a witch by a midwife after their father, the king, rejected them for not being the son he wanted.  Now, they have been cursed by the witch to live in a small clearing, unable to leave until they save a soul from death's door.  The sister's hope comes from the prophecy each were given by the midwife when she left them with the witch: "Your fate is not yet sealed/ Even in the darkest night/ a star will shine/ a bell will chime/ a path will be revealed."

As an adult, Otto becomes a master harmonica maker, but when one of them is destroyed in an important order for 13 harmonica's, he decides to include the one that each of the sisters had played.  One the bottom of the harmonica, he paints the letter M.

The story skips now to Germany in 1933, just as Hitler comes to power.  For 12 year old Friedrich Schmidt, life is hard.  Not only was he born with half is face covered in a wine colored birthmark, and Friedrich can hear music in his head and has an uncontrollable need to conduct it, making his a target of the other kids and earning him the name Monster Boy.  A loner, Friedrich finds the M marked harmonica in an abandoned factory.  The music from it is like no other he has ever heard before.  After his father is arrested and sent to Dachau, Friedrich becomes a target of the Nazis despite the fact that his sister is an important member of the Hitler Youth's League of German Girls.  Though he is about to audition for the music conservatory and realize his dream of conducting, Friedrich realizes he must try to free his father and escape Germany.

The story skips two years to an orphanage in 1935 Pennsylvania.  Mike Flannery and his younger brother Frankie are adopted by Mrs. Sturbridge's lawyer Mr. Howard on the spot when it turns out that they can play piano beautifully.  The adoption is done to meet the requirements of the will left by Mrs. Sturbridge's father.  But when Mike learns that Mrs. Sturbridge is planning on have the adoption reversed, he makes a deal with her.  If her keeps Frankie, he will audition for a travelling harmonica troupe of young kids.  After all, he has a harmonica marked with an M that makes an especially beautiful sound.

The story jumps to California in 1942.  Japanese Americans have just been rounded up and sent to internment camps.  For Ivy Lopez and her parents, that means a job and the possibility of owning land, having a permanent home and never needing to move from job to job.  Her father new job is caring for the house and land of an interned family, the Yamamotos, whose oldest son is serving in the army.  Ivy, who has come into possession of a harmonica marked with and M that makes an especially beautiful sound from her old school, is excited to join the orchestra in her new school, until she discovers that the Mexican American students don't attend the main school, going to a ramshackle annex instead.

Three different stories bound together in space and time by one harmonica marked with an M but how do their destiny's connect?  Ryan ends each story with a cliffhanger, but it all comes together in the end.  In the meantime, she shows the reader how music can be a sustaining force even in the most difficult times.  Each of the characters must deal with situations that are rife with hate, suspicion and intolerance to suffering for those who are different and helpless in some way.

Ryan uses the technique of a Rahmenerzählung, framing the three stories with the story of Otto and the fairytale story of the three sisters, giving it a nice magical element.  Ryan holds the reader in suspense about every one's destiny and how they connect until the very end, but it is a delicious kind of suspense.

Echo is an enchanting novel that carries a message of hope, even throughout the scary parts, but readers should still read it with a willing suspension of disbelief to really get  appreciate the entire story.

This book is recommended for readers age 10+
This book was borrowed from the NYPL (but I liked it so much, I've decided I need to buy a copy for my personal library).
Posted by Alex at 7:36 AM