The Wren and the Sparrow by J. Patrick Lewis, illustrated by Yevgenia Nayberg 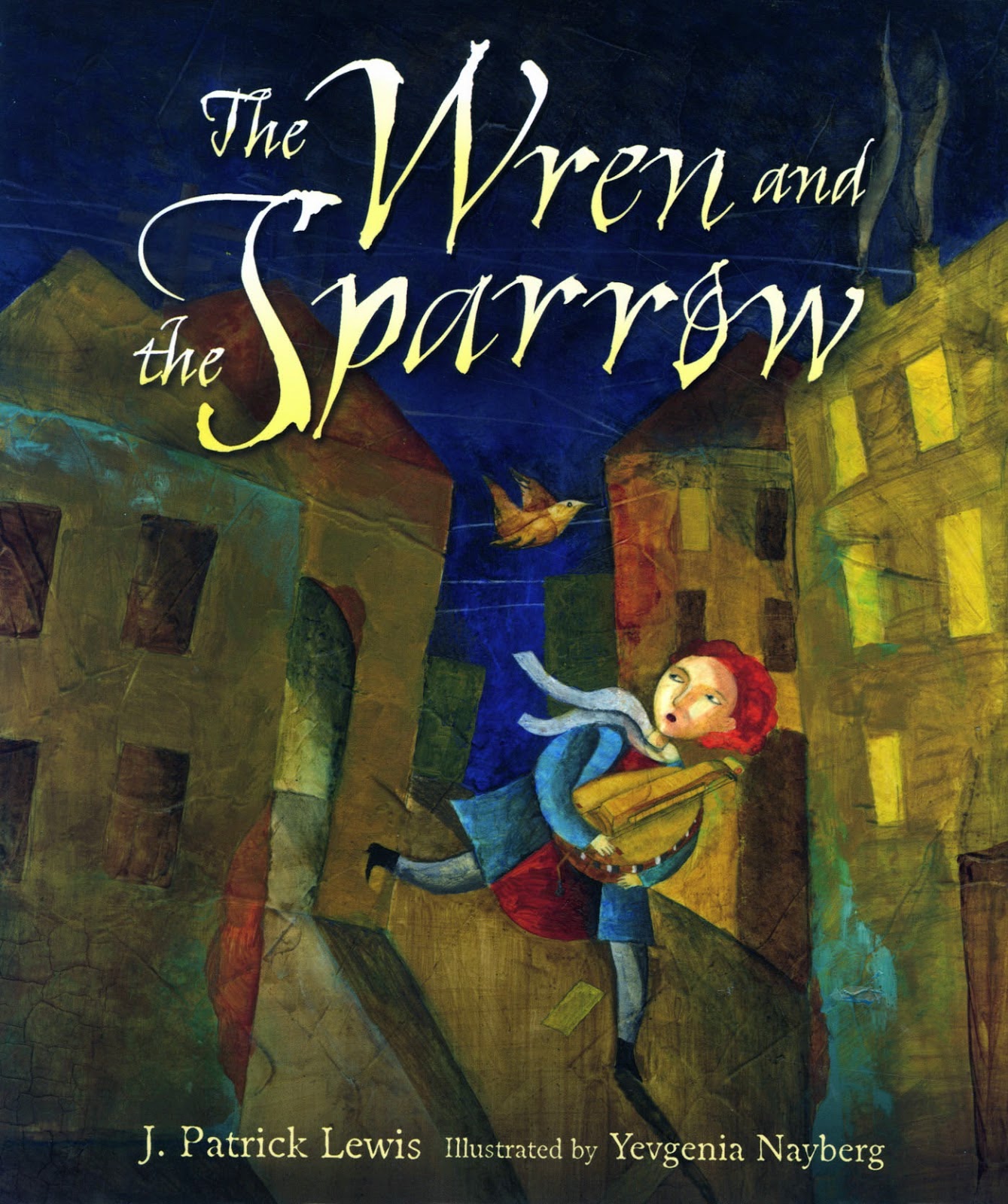 It's hard to imagine that such a lyrical story could be written about a time as terrible as the Holocaust, but that is exactly what J. Patrick Lewis has done in this new picture book allegory.

The story takes place in a small town in Poland that has shriveled up under the occupation of the Tyrant and his Guards.   Living in shadow, an old man nightly plays his hurdy-gurdy, singing so beautifully, he is called the Wren by his neighbors.  He has on music student - a young girl called the Sparrow with fiery red hair.

One day, the Guards order all the residents of the town to turn in their musical instruments.  The Wren brings his beloved hurdy-gurdy but begs to allowed to play one more song before handing it in.  As he plays, the whole town begins to sing.  At the end of his song, the old man gives his instrument to the Guards and disappeared himself, never to be seen again.

The instruments are all thrown into a pile to be destroyed later.  But later that night, the Sparrow sneaks into the storage area and finds the hurdy-gurdy.  Inside it is a hidden note from the Wren to the Sparrow.  She takes the instrument and note and hides the them in the hope that they will survive the war and be found in the future and that the finder will know exactly what happened in this small town in Poland and the world will never forget.

I think this is a wonderful example of an allegorical story, Allegory, you will remember, is typically used as a literary device that uses symbolic figures, events etc for revealing a more complex issue or meaning in a work with a moral or political message.  Here, Lewis uses symbolic types rather than realistic characters, - the Wren, the Sparrow, the Guards, the Tyrant - in an abstract setting - a small town in Poland - to achieve maximum impact of this Holocaust story about the Nazi occupation and the the fate of Europe's Jews.   The result is a powerful multi-layered picture book for older readers that should not be missed. 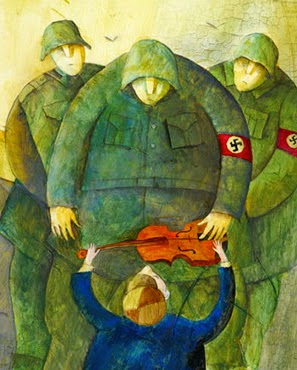 Patrick's words and text reminded me of the way Expressionist writers sought to convey feelings and emotions in an anxious world.  Here his words are simple and elegant in contrast to his topic, but at the same time so very ominous.  Unlike Eve Bunting's excellent Terrible Things: an Allegory of the Holocaust, another picture book for older readers, which ends on a note of hopelessness, The Wren and the Sparrow sees hope for the future.

Perhaps following Patrick's lead, Yevgenia Nayberg's expressionistly styled illustrations are painted in a dark palette of yellows, greens and browns that ends in a lighter illustration done in bright blue-green at the end, symbolizing a message that even in the darkest of days, hope can survive.  Illustrations and text compliment and enhance each other throughout this allegory.

And be sure to read the Afterword at the end of the story that explains how Lewis was inspired by the street musicians and performers in the Lodz Ghetto.  In fact, performers and music were a sustaining force in ghetto life under the Nazis and Lewis has written a beautiful homage to them in The Wren and the Sparrow.