From the Archives #28: Lucy of the Sea Rangers by F.O.H. Nash 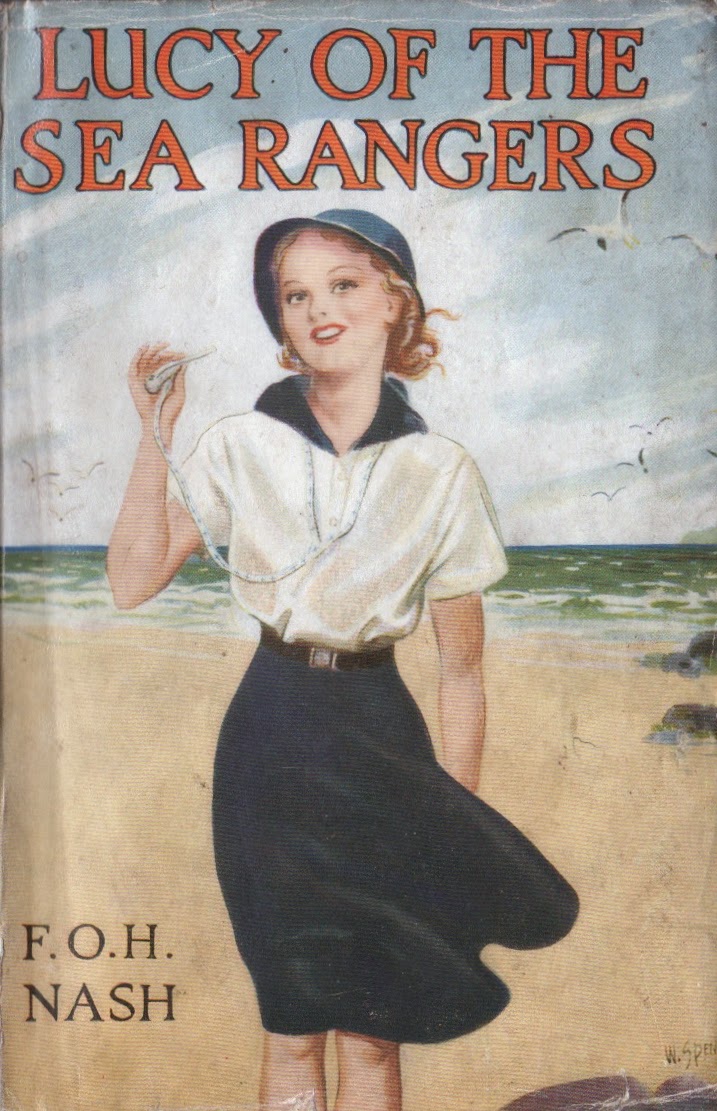 I don't get sick often, but when I do, I like to read comfort books.  Usually that means an old book I have read before that just makes me feel good.  So at the beginning of February, when I found myself home with a respiratory infection, I started to reach for an old Nancy Drew or Chalet School book, but decided to reread Lucy of the Sea Rangers.  I love old books about Girl Scouts and Girl Guides and have a small but nice collection of them.

In this novel, Lucy Butler, 16, is a Sea Ranger, a branch of the Girl Guides, but living in London, she and the other Rangers have never had any real sea experience.  The Blitz is just beginning, so when the department store she works in is damaged by a bomb, Lucy is off to the small village of Sea Bay in Somerset to live with her Aunt Nell and help out in her shop.  Best of all, Sea Bay is located right on the beach.

It doesn't take long for word to spread among the village girls that Lucy is a Sea Ranger.  And although Lucy misses her best friend and fellow Ranger Sally, who is still in London,  she manages to meet and become friends with a girl named Betty, who also has lots of Guide experience.  Before long, they two girls have cobbled together a patrol for the local girls.

One afternoon, Aunt Nell tells Lucy that Mr. Grant, who runs a large guest house and golf course, needs some clerical help and Lucy immediately thinks of her friend Sally.  Wouldn't it be grand if Sally came to live with Aunt Nell and could work for Mr. Grant.  On her way to talk to Mr. Grant about this, Lucy and Betty see a small plane crash land on the edge of the golf course.  Out come a man, a woman and a young boy claiming they had just escaped from Holland and the Nazis.

Feeling sorry for the family, the Vanhuysens are quickly given jobs and help from the trusting villagers.  But when a fire threatens to destroy the club house on Mr. Grant's gold course, Lucy becomes suspicious of the Vanhuysens when she finds herself suddenly surrounded by fire with no way to escape and realizes that Mrs. Vanhuysen is responsible to it.  Perhaps this refugee family isn't who or what they claim to be, after all.

Aside from the possible spy family story line, which is somewhat interesting, the novel provides a lot of Guide and Ranger information, from how patrols were formed, naming them, ranks and activities, to making uniforms.  And of course, there is the usual collection of girls with different personalities for added interest.  In fact, the reviewer for the Times Literary Supplement wrote of Lucy of the Sea Rangers that aside from the spy business "...which is distressingly inevitable by now, there is a healthily ordinary atmosphere about this story." (TLS November 20, 1943).

Lucy of the Sea Rangers is a fun look at guiding during the war in England and a bit of history not many people know about. Two books that may be useful to anyone interested in Guiding in fact and fiction are
How the Girl Guides Won the War by Janie Hampton  and
True to the Trefoil: A Celebration of Fictional Girl Guides by Tig Thomas, editor