The Cats in Krasinski Square by Karen Hesse, illustrated by Wendy Watson 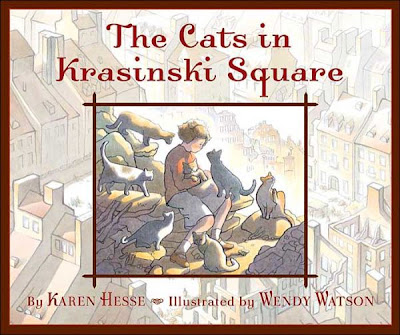 When I first started this blog, I reviewed a book called The Cigarette Sellers of Three Crosses Square by Joseph Ziemian.  It was the first of many books about the Warsaw Ghetto that I have reviewed here and these stories about the brave individuals who were part of the resistance never has ceased to awe me.

So when I found The Cats of Krasinski by Karen Hesse on the library shelf, I thought Wonderful! A nice picture book for older readers who may already have some familiarity with the Holocaust to introduce them to the Warsaw Ghetto and Jewish Resistance in WWII.

As we know, lots of Jewish children of all ages often escaped the Ghetto and lived openly right under the Gestapo's nose, passing for Aryan.  Whenever they were able, they smuggled food and other necessities back to family and friends still behind the Ghetto wall.

In Hesse's story, two sisters have escaped the Ghetto and are living hand to mouth in Warsaw.  The younger sister has befriended the cats that became homeless when their owners were rounded up to live in the Ghetto.  Her older sister, Mira, is working with the resistance.  They are expecting some food to arrive by train, carried by other resistance workers, to be stuffed into the holes in the Ghetto wall where it can be found by the Jews still living there.

But word comes that the Gestapo knows about the plan and will be waiting at the train station with trained dogs to arrest the resistance workers and confiscate the food.  The young girl gets an idea to distract the Gestapo's dogs when the train arrives.  And it works, thanks to the cat of Krasinski Square.   The cats are gathered up and let loose just as the train arrives.

The Cats of Krasinksi Square is an uplifting age appropriate story that has a lot to say to young readers not only about courage and taking risks,  but that sometimes kids can come up with ideas that actually work.   Told in sparse, lyrical free verse, the story is enhanced by the corresponding illustrations by Wendy Watson.  Watson used washed out muted colors in pencil, ink and watercolor that certainly evoke the place and period in her beautifully rendered illustrations.

I thought that putting a merry-go-round in Krasinski Square at the the beginning and end of the book was an interesting touch.  Carousels are such iconic symbols of happy children having fun, yet here it is juxtaposed with and accentuating the deplorable conditions that the Nazis forced upon the Jewish children.  It makes a very telling comment.

This story is, as Hesse writes in her Author's Note, based on a real event involving cats outsmarting the Gestapo at the train station in Warsaw that caught her attention when she read about it.  There is also a historical note about the Warsaw Ghetto and Jewish Resistance that anyone not very familiar with these might want to read.

This book is recommended for readers age 7+
This book was borrowed from the NYPL
Posted by Alex at 8:24 AM