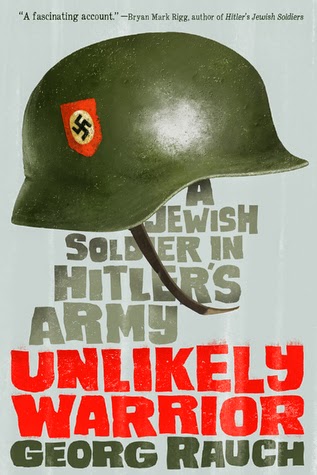 There aren't many first hand accounts of men who fought as soldiers in the German army during World War II, particularly not for young adult readers, which makes Unlikely Warrior so much more compelling and interesting to read.  Georg Rauch really takes the reader inside this relatively unknown world and give us an opportunity to see what life was like on German side of things.  Georg divides his story into three distinct parts.

The first part deals with Rauch's training for the army and his family history.  In February 1943, 18 years old Vienna-born Georg doesn't really want to be a soldier in Hitler's army , but when his draft notice arrives, he has no choice.  Reporting for training, his radio building and Morse Code hobby skills means he can train as a radio operator and telegraphist.

Now, for most Germans being in the army wasn't anything special - every able bodied male was conscripted, especially after the heavy losses they suffered on the Eastern Front at Stalingrad - expect for one thing: in Hitler's German Reich, Georg Rauch was consider to be Jewish in Hitler's Reich: Georg's maternal grandmother was Jewish, which meant his mother was Jewish, and so was he.

Sent to train in Brno, Czechoslovakia, the now Funker (radio operator) Rauch is chosen along with a few other men to be promoted to officer status.  But because he is a Mischling (a person of mixed blood), Georg believes he will not be able to serve in officer capacity and reports this to this superior officer.

Not long after, Georg finds himself at the dreaded Eastern front as a radio and telegraph operator.  Ironically, Hitler's Jewish soldier is awarded the Iron Cross in August 1944.

The second part of Rauch's story covers the time he spent in Russian labor camps as a POW and this is the most difficult  section to read.  Shortly after receiving his medal,  Rauch is captured by the Russians and spends the rest of the war as a POW.  The details of being a prisoner of war are harrowing, but despite many close calls, starvation, illness and injury, Rauch manages to survive the war and the Russian POW camps, unlike many of his fellow soldiers.

Part Three covers the end of the war and Rauch's long trek home to find his hopefully still living family.  Each part of Rauch's wartime journey is an intriguing window into the life of a German soldier.  Being 1/4 Jewish doesn't really seem to impact his time at the front or as a POW, as much as his refusal to serve as an officer does.  On the other hand, it doesn't make Rauch feel like an enemy, and one certainly would not think of him as a Nazi, not if he is 1/4 Jewish, nor does he (or any of the German soldiers he writes about) ever behave with the kind of cruelty we associate with Hitler's soldiers and so it becomes easy to read his story and emphasize with it.

Georg Rauch's easy writing style pulls the readers right into his life and his open honesty about his himself and how he feels about everything is refreshing.  He has penned a fascinating memoir is based in part on his own recollections and in part on letters he had written to his mother while in the army, letters she carefully numbered and tucked away.  Because the letters were written in situ, they make Rauch's experiences sound much more immediate and realistic than had he written his story complete from memory.  To add to the authenticity of his story, photographs of Rauch and his family are included.  Rauch's wife Phyllis has done an excellent readable translation of Unlikely Warrior from the German, perhaps so well done because it was a labor of love.

After the war, Rauch went on to fulfill his dream of being an artist, living in Mexico with his wife, who translated his memoir.  Sadly, Georg Rauch passed away in 2006 and never saw this wonderful Young Adult version of his story in print.