Women of Valor: Polish Resisters to the Third Reich by Joanne D. Gilbert 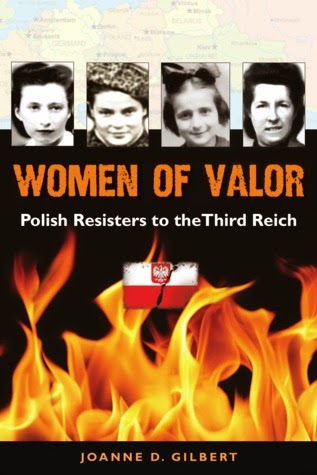 When we think of partisans and resisters to the Nazis, most of us don't usually think about women.  After all, it was a hard, dangerous business to fight such a cruel regime.  But, as we learned from Kathryn Atwood's informative book, Women Heroes of World War II: 26 Stories of Espionage, Sabotage, Resistance and Rescue, many women were willing to risk everything, including their lives, to fight for what they believed to be right.

Now, Joanne D. Gilbert has written a book that tells us about even more brave women and since March is Women's History Month and this year's theme is Weaving the Stories of Women's Lives, it seems a perfect time to showcase Women of Valor.

Between 2012 and 2014, Gilbert interviewed four women who had lived with their families in Poland, but who, through different circumstances, had found their way in the surrounding forests and either joined partisan groups or found other ways of resistance when the Nazis occupied their country.

Manya Barman Auster Feldman had lived a religious, comfortable life with her parents, 3 sisters and 2 brothers in Dombrovitsa in eastern Poland until Hitler invaded it in 1939.  Suddenly, life became harder and harder and eventually all of Dombrovitsa's Jewish families were crowded into a two block ghetto.  When it appeared likely that the ghetto was going to be liquidated, Manya's father decided her, Manya, her older sister and two brothers would try to escape into the forest, leaving behind her mother and two little sisters.  Walking all night, they found the Kovpak partisan headquarters, where they were sent to different battalions.  Manya, still just a teenager, soon learned how to fight, steal, sabotage the Germans efforts, and nurse the sick and wounded.  Her story, as are all the stories included in Woman of Valor, is harrowing and amazing at the same time, and Manya herself credits luck for her many narrow escapes from death while she fought with the partisans.

Faye Brysk Schulman was also living a comfortable, religious life with her family in Lenin, Poland.  Her  older brother had learned photography and had enlisted Faye to help him.  It was her knowledge of photography that saved Faye's life when the ghetto they had been forced to live in was about to be liquidated, it was her job to take the photos that the Nazis demanded she take.  In September 1942, Soviet partisans stormed through Lenin, and warmed the remaining Jews to run.  Faye, still a teenager,  found the partisans, joined the Molotavia Brigade, where she spent the war years fighting, nursing and photographing events whenever she could steal, make or find what she needed.

Even though the rest of her family was Polish,  Lola Leser Lieber Schar Schwartz was born in Hungary/Czechoslovakia.  In 1938, when the Germans occupied Czechoslovakia, the Polish passports of her immediate family were no longer acceptable there.  The Lesers, including Lola, quickly fled to Poland and their extended family.  Little did Lola dream that after being continuously on the run from the Germans, hiding in all kinds of weather and places, including under a tree in the forest, it would be her Hungarian/Czechoslovakian birth that would save not just her life, but many others when she received official documents exempting her from the same treatment as the Polish Jews.  Needless to say, these documents sparked a flurry of forging more "official" documents for other Jews in peril.  Later, when her husband Mechel Lieber was arrested, Lola was even brave enough to go the Adolf Eichmann's office to try to convince him that it was a mistake.  Lola was indeed a woman of great courage.

Miriam Miasnik Brysk is the youngest of the women interviewed.  Only 4 years old when the war started, Miriam's family left Warsaw, Poland for Lida, her father's home then under Russian rule.  But when the Germans arrived in Lida in 1941, it didn't take long for persecutions to begin.  The Miasniks were fortunate because Miriam's father was a surgeon and the Nazis needed him.  In 1942, Miriam and her parents escaped the Lida ghetto with the help of a partisan group that decided they needed a doctor more than the Nazis did.  Miriam spent the rest of the war going from place to place with the partisans.  Her hair was cut off and she was dressed like a boy, had not formal education until after the war, but did possess her own gun for a while.  And she helped out wherever she could, even taking apart machine guns, cleaning them and putting them back together.

As each woman tells her story, it feels as though she is speaking to you personally, making this a very readable book and I highly recommend it.  As they wove their stories, each remembered in great detail what their lives were like before and under the Nazi reign of terror and each acted with remarkable courage.  Sadly, they all lost almost all the members of their families, often witnessing their murders.  Glibert doesn't let them stop at the end of the war, but we also learn about their lives after and up to the present.  Interestingly, they all found ways to express their Holocaust experiences though art later in life.

These are only four stories about acts of resistance, however, and, as Gilbert reminds us in Epilogue, most of the women who chose to resist the Nazis perished, taking the details of their courageous deeds with them, reminding us that what we do know about women resisters is really just the tip of the iceberg.  But let all these brave women, known and unknown, be an inspiration to us all in the face of oppression.

This book is recommended for readers age 13+
This book was sent to me by the publisher, Gihon River Press

This is book 2 of my 2015 Any War Reading Challenge hosted by War Through the Generations
Posted by Alex at 9:59 AM