Today, the sad news came over the Internet that Mal Peet has passed away.  Award winning Mal Peet has been a favorite children's and YA writer of mine for a long long time and I always looked forward to his informative reviews and interviews in the Children's Book section of The Guardian.

Mal Peet's WWII novel Tamar: a Novel of Espionage, Passion and Betrayal was one of the most intelligent YA books I have reviewed here at The Children's War and I am reposting it today in remembrance of him and in the hope that it will entice readers who aren't familiar with this wonderful writer to read his books or if you are familiar with him, you will take a moment to remember him.

You can also read his many articles, reviews and interviews at The Guardian HERE 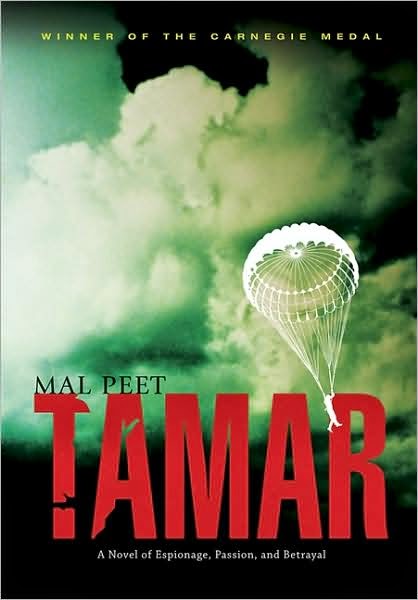 Tamar is one of those stories that is difficult to talk about without giving too much away and spoiling the twist that comes at the end of the novel.  And Tamaris well worth the read just to get to that.  It begins in 1979, when William Hyde asks his son Jan if he and his wife would consider using the name Tamar for their expected baby, to which they happily respond in the affirmative.  It is this daughter, Tamar, who narratives the story that follows.The story then switches to 1945, introducing Dart and Tamar, undercover names (based on English rivers) for two Dutch born, British trained agents for the SOE (Special Operations Executive) just as they are about to parachute into the Nazi-occupied  Netherlands to work with the Dutch Resistance in an attempt to reorganize it during that terrible Hunger Winter when so many people died of starvation.  Once inside Holland, Dart, who is the team's radio operator, operates under the name Dr. Ernest Lubbers, living and setting up his radio at the local mental asylum.  Tamar, under the name of Christiaan Boogart, is fortunate enough to be placed in the home of Marijke Maatens.  Tamar/Christiaan and Marijke have been lovers for a while, but when Dart/Lubbers realizes what is going on between them, he becomes very angry and jealous.  He has also fallen in love with Marjike.The narrative moves to the spring of 1995.  Jan Hyde's daughter Tamar Hyde is now 15.  Her father has be missing for a few years and her beloved grandmother, Marijke, has recently passed away, after being placed in a nursing home because she was seemingly suffering from dementia.  Now, her grandfather has just committed suicide.  As a result of that, Tamar finds herself in possession of a box full of his World War II memorabilia.  Tamar knew that her Grandad "was fascinated by riddles and codes and conundrums of labyrinths, by the origin of place names, by grammar, by slang, by jokes...by anything that might mean something else.  He lived in a world that was slippery, changeable, fluid." (pg 111)  And so Tamar begins a journey to figure out that codes messages her Grandad has left regarding his life and suicide.From here on the story alternates between 1945 and 1995 as events unfold and characters are explained.  I don't want to say too much more at this point and risk an unintended spoiler, which can so easily happen with suspense novels you feel enthusiastic about. Tamar is an exciting, suspenseful, very sophisticated and often gritty YA novel, but it is definitely not going to be everyones cup of tea.  A lot of readers said they had a hard time getting into the story, while others complained that it was big (379 pages)  and too slow moving, while other readers thought it was a 5 star story.  I tend to be on the side of the 5 star folks.   Peet's teenage narrator proves to be quite formidable.  One would almost think beyond her 15 years, but given Tamar's life experiences so far, maybe her formidability is completely understandable.  Through her voice, Peet details her discoveries in a very straightforward style, clean and clear, yet it is all done in such lyrical prose that sometimes it often made me almost forget the subtext of the title.  Without my realizing that he had done it, Peet has taken that subtext espionage, passion and betrayal, wound and woven them together in a story that left me unsuspecting until the very end and then totally surprised.  In fact, after I finished it, I thought the whole novel is really a reflection of of William Hyde's love of all things enigma and that, I think, that is what makes Tamar such an unusual story.  And yet, all along the way, Tamar gives us innocent (?) hints about where things are going. The book is recommended for readers age 14+This book was bought for my personal libraryWalker Books Australia has a very nice teacher's guide here.This book was awarded the following well-deserved honors:2005 Carnegie Medal206 Wirral Paper Back of the Year2008 ALA's Top Ten Best Books for Young Adults2011 De Gouden Lijst