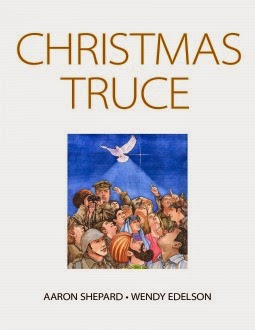 There have been lots of stories and books written about the Christmas truce of 1914 that spontaneously occurred between the Allied troops and German troops.  Now, Aaron Shepard has written another version of this astounding event.

In a fictional letter to his sister Janet back home in London, Tom, a soldier at the Western Front, tells her the extraordinary story of how the truce came about.  Soldiers on both sides of No Man's Land, a space of only 50 yards, were relatively quiet on Christmas Eve day, waiting for replacements after heavy fighting and many deaths.  It was cold and had snowed, so everything, including the soldiers, was frozen.

Suddenly as night fell and even the sporadic gunfire stopped, the British heard the Germans singing "Stille nacht, heilige nacht…" and saw that they had placed Christmas trees, complete with burning candles, all along their trenches.

Soon, the soldiers on both sides began to trade favorite Christmas carols back and forth across No Man's Land.  Finally, the Germans invited the Allied soldiers to come out of their trenches and meet in the middle: "You no shoot, we no shoot" they said.

As Christmas Eve wore on, soldiers on both sides discovered they had lots in common.  After exchanging gifts - badges and uniform buttons, cigars and cigarettes, coffee and tea, and even newspapers - the soldiers parted and went back to their trenches.

As Tom ends his letter to his sister, he writes: "All nations say they want peace.  Yet on this Christmas morning, I wonder if we want it quite enough."

The Christmas truce of 1914 was quite remarkable in the annals of military history and some people even believed it never happened.  But as Shepard points out in his afterward, the truce was reported in the British newspapers, photos included (and I found reports about it in the New York Times dated December 31, 1914).  In this fictional letter from Tom, Shepard tries to clear up some false beliefs and misconceptions, all explained in the afterward.

Christmas Truce is beautifully and realistically illustrated in watercolor by Wendy Edelson, who has really captured the idea of the Christmas truce.  The cold browns of the trenches gives way to color, first in the line of brightly lit Christmas trees across No Man's Land, with warmer and brighter colors added as the men get closer and closer to each other.  Christmas Truce may be a picture book, but it is definitely meant for older readers.

Christmas Truce would certainly be a welcomed addition to any library - home, school, classroom.

This book was an E-ARC from NetGalley

GOOD NEWS:  If Christmas Truce is a book you think you might like to read, and you have an ereader, you can download this book for free at
Barnes & Noble
Amazon
iTunes (this is not a direct link)