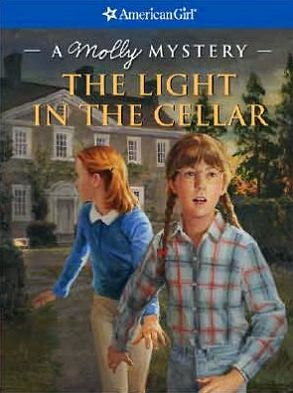 Everyone at school needs to sign up to do volunteer work for the war effort of some kind and Molly McIntire really wants to join the Junior Red Cross with her friends Susan and Linda.  But Emily Bennett, an evacuee from the London Blitz who has been staying with the McIntire's since she arrived in the U.S., wants to volunteer to be a magazine delivery girl at the Oak Knoll Convalescent Hospital.  That way, she can visit her Aunt Prim, recovering from pneumonia.  Emily was supposed to live with Aunt Prim for the duration of the war, but is living with the McIntire's instead until she recovers.

But before any magazines can be delivered, Emily needs to learn how to ride a bike, since that is their only means of transportation to Oak Knoll.  One evening, Molly, Susan and Linda take Emily to a deserted road by the old (haunted?) Greystone Manor.  While there, they notice a light in the cellar is on.

Shortly after this, Molly's mother discovers seven 10 pound bags of sugar are missing from the Red Cross office, where they are kept.  The supplies are used to bake cookies for the soldiers on the troop trains passing through.  Sugar is rationed and can't be replaced.  Oddly, Molly overhears a conversation at Oak Knoll that supplies there are missing as well.  Could someone be stealing these valuable supplies to sell on the black market?

Surprised, Molly finds she enjoys being a magazine delivery girl and meeting the different patients at Oak Knoll, especially Mrs. Currier, who lives in Greystone Manor.  When Mrs. Currier asks Molly to go get her reading glasses from the house, Molly agrees despite being more than a little creeped out.  While there with Emily the next day, a black truck pulls up to the house and two men start carrying in packages and putting them in the basement.  Trouble is, they forget to put the spare key to the Manor back where it belongs and must return again.

Bringing Linda and Susan with them, Molly and Emily return to the Manor with the key.  While there, they decide to look in the basement window and, sure enough, there are the missing bags of sugar from the Red Cross and Oak Knoll.

But who could be doing something like this?  Mr. Laurence, who delivers Oak Knoll's laundry, tells Molly to be careful are Marta, a Polish refuge with a young daughter, hinting that the missing items are because of her, but Molly refuses to believe that, especially not after what Auntie Prim says about her.

What to do?  Can Molly and her friends actually set a trap to catch the thief before all those supplies disappear on the black market?

The Light in the Cellar is a middle grade novel that is full of adventure and excitement, but of a kinder, gentler nature than many of the WWII books I've reviewed for young readers.  For today's readers, though, the amount of freedom 9 year old Molly enjoys to ride her bike and just hang out with her friends may surprise them.  I know it did my Kiddo when she read them.

However, there are a few plot holes.  How long has Mrs. Currier been at Oak Knoll if Molly and her friends have always thought of Greystone Manor as haunted and falling into disrepair and why didn't Mrs. Currier have her reading glasses already if it has been so long?

Still, the historical facts in the novel are well-researched story by an author who is very familiar with American Girl values and has written a number of books about the historical figures that were the original purpose of the Pleasant Company before it was sold to Mattel.

And my Kiddo learned a lot because American Girl books involving historical figures like Molly McIntire are always written so that they give young readers a good idea of what life might have been like for girls their age, and the mysteries are not different.  The Light in the Cellar introduces kids to rationing and ration books, and the black market, to the work of Red Cross volunteers, to plane spotting by kids like Molly's older brother Ricky, and, of course, to scrap collecting - all so much a part of life during WWII.

However, I did like that Molly and Emily got a little testy with each other, showing that sometimes friendships can be strained no matter what the circumstances and letting readers know that Molly, like themselves, isn't perfect.  Then again, sometimes the McIntires forgot that Emily wasn't one of them and treated her like another sister, which proved to please her very much.

All of the American Girl historical figures have a series of mystery stories like Molly's, so if your young reader is showing an interest in mysteries and/or history, these are great starter book (and a nice prelude to novels like Nancy Drew and Harriet the Spy among others).