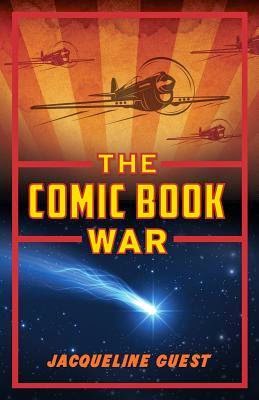 It's 1943 and Robert Tourand, 15, misses and worries about his three older brothers who are off fighting in Europe with the Canadian armed forces.   So when he finds a small piece of a meteorite, it becomes a kind of magical charm for him.  Thanks to it, Robert soon, he begins to see and believe a cosmic connection between what his brother write about from the front line in their letters, and the heroes in the comic books he obsessed with.

And so, he pairs brother to comic according the their parallel experiences: favorite brother Patrick is assigned The Maple Leaf Kid, brother James and Sedna of the Sea go together because James could use her wisdom, brother George, a pilot, is paired with flying ace Captain Ice.  Their assignment: to keep his brother's safe.

It all works nicely until his mother finds a pair of torn pants and decides Robert need to be taught a lesson.  Now, she decides, his weekly allowance, his only means of buying the newest editions of the comic book that contain secret messages about his brothers, would be better spent on war stamps.  Now, Robert needs to figure out a new way to make sure he can buy his three favorite comics every month.

And it seems that ever since his found his magical piece of the universe, luck has been with him.  When his teacher announces that the student who collects the most fat for the war effort will win four completely filled books of war stamps, valued at $4.00, Robert thinks he's found the answer to funding his comic addiction.  But despite his best efforts, he didn't expect such stiff competition from Crazy Charlie (Charlene) Donnelly, a girl as much on a mission as Robert.

So, when fat collection doesn't yield the needed money, Robert decides to take a job as a telegram delivery boy.  Trouble is, Crazy Charlie has the same idea.  They are both hired, and as more and more telegrams need to be delivered, Charlie seems to be able to get around Calgary some much faster than Robert on her dilipated second hand bike compared to his sleek newish Raleigh.  Robert is so busy thinking about his comic books, he never bothers to ask Charlie about herself.  Nor does he think about what is in the telegrams he is delivering, until one arrives at his house in Charlie's hands.

At first, I didn't much care for The Comic Book War.  I found Robert to be a very unappealing character, too focused on himself and completely lacking in empathy for anyone else.  Ironically, Robert and Charlie are both loners, outsiders that could have been friends from the start, if Robert had been able to see beyond himself.  But as I continued to read, I began to see Robert in a different light, as a person who could actually have some compassion for the recipients of the telegrams he was delivering.

I also thought that Robert was a little too old to be so obsessed with comic books, even for the WWII time frame.  But this is, after all, a coming of age novel.  I began to think about how kids will use all kinds of ways to cope with fear, loss and trauma.  Robert keeps his fear about his brothers (and about growing up) from overwhelming him using magical thinking (always a good defense mechanism) that his comic book heroes will keep his brothers (and him) safe.

Charlie, who was much more in touch with reality, was a good contrast to Robert, despite her own problems in life.  I would have actually liked to have read more about Charlie, who is a story in her own right.

It is always interesting to find a Canadian story about kids in WWII because they have such a distinct perspective.  Canada was still part of the British Commonwealth in 1939, and even though it declared war on the Axis powers independently of Britain, it sent troops overseas to fight with the British Expeditionary Forces and the RAF.

Two nit-picky things did bother me.  Kids did not carry their school books to school in backpacks back them.  They used school bags or carried them in their arms.  And I did wonder about why lights were left on so freely at night.  I thought all of Canada had blackout precautions during the war.  But I could be wrong on these.

This book is recommended for readers age 11+
This book was received from the publisher
Posted by Alex at 10:49 AM