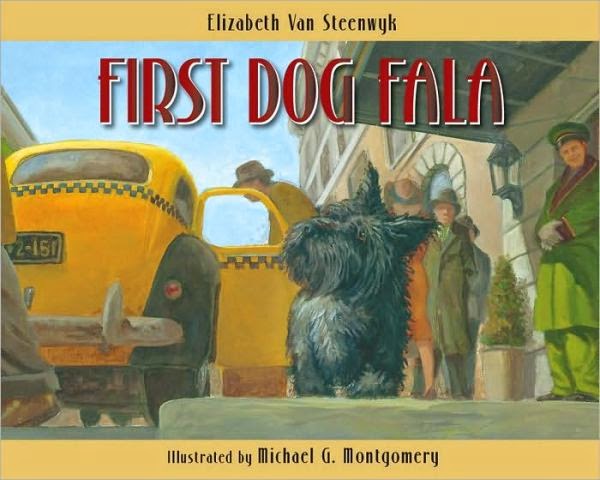 On Wednesday, I wrote War Dogs: Churchill and Rufus by Kathryn Selbert, detailing the relationship between Prime Minister Winston Churchill and his little pet poodle Rufus, his constant companion during WWII.  Well, Rufus wasn't the only dog to have a master who was also a world leader.  American President Franklin D. Roosevelt went through the war years with a little black dog named Fala.

In her dog biography, Elizabeth Van Steenwyk writes that Roosevelt spent much of his time during his first term as president alone at the end of the day.  His children were grown and away, his wife traveled to different parts of the country giving speeches   And so, one day, his cousin Margaret Suckley brought him a little Scottish terrier.  The two took an instant liking to each other.  Roosevelt promptly named his new puppy Murray the Outlaw of Fala Hill (Murray was an old Scottish relative of the Roosevelt's), shortened to Fala.

Once trained, it didn't take Fala long to settle in as the first dog, whether he was at the White House, the president's home in Hyde Park, NY or just riding around in the presidential car.  Because Roosevelt was confined to a wheelchair do to polio, Fala often has to rely on visitors and cabinet members to throw his toys for him to fetch.

Fala was apparently a somewhat adventurous dog and managed to escape the White House and wander the streets of DC before being brought home by the secret service.  Unfortunately, Steenwyk doesn't tell us how Fala managed to get or if his escape hole was ever discovered.

Not only is this a book about Fala, but it also introduces and gives insight in the kind of man Franklin D. Roosevelt was, and how he conducted a war in Europe and the Pacific without the same kind of mobility other world leaders had.

First Dog Fala proves itself to be a very engaging picture book for older readers.  Each two page spread has a page of text accompanied by a detailed corresponding illustration.  The illustrations, which have somewhat of an Edward Hopper quality to them, are done in oil on canvas and give a warm sense of companionship, but also the darker tones reflect the seriousness of the times.

While this is a wonderful historical look at the times, it does lack any back matter, such as more information, a time line and sources Steenwyk used.  Still, I would definitely recommend First Dog Fala and I would also pair it with War Dog: Churchill and Rufus.  These are perfect books for dog lovers and/or budding history buffs.

If you ever are in Washington D.C., you might want to visit the relatively new Franklin Delano Memorial where you will find not only the President memorialized, but also his canine companion Fala.