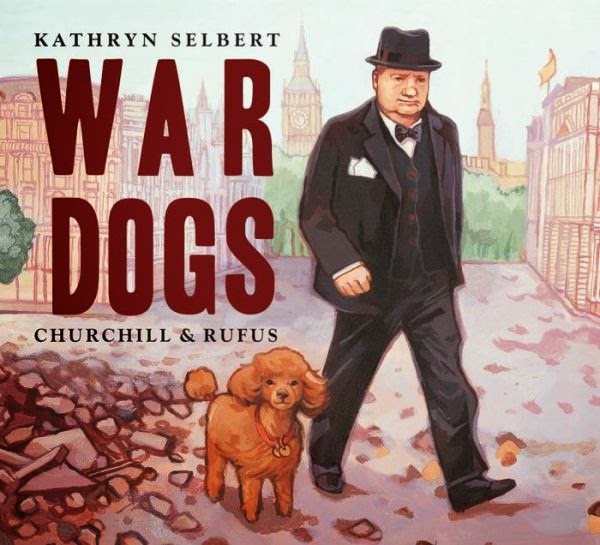 It isn't surprising that Winston Churchill was an animal lover, but you would expect he would have a larger dog than a little poodle as one of his beloved pets.  But during the darkest days of World War II, one of his great comforts and his constant companion was his little dog named Rufus, a spunky brown poodle.

War Dogs is written from the point of view of Rufus and introduces readers  Churchill when he was Prime Minister of Britain during World War II from 1940 to 1945.

In this vividly imagines picture of their life together, at times Rufus accompanies his master through the rubble of the bombed out streets of London, or sits nearby as Churchill writes his famous speeches delivered in the House of Commons and over the radio to the British citizens.  Other times, they go out for quiet walks, or spend time in the underground bunker, where Rufus likes to inspect every nook and cranny while Churchill works.

Rufus is privy to all the secret plans for the D-Day landings at Normandy long before most people, and he is by Churchill's side when victory finally comes and the two companions could retire to the country.  As readers go along, they learn not only about the special relationship between this great man and his dog, but also some important preliminary facts about the war and they will be able to read some of the more famous lines of Churchill's speeches scattered along the pages:
The detailed, realistic acrylic and collage illustrations for War Dogs are done in a palate of earth tones,  emphasizing the different moods of the war years and moving the narrative along nicely.  Two of the most effective illustrations are two page spreads of London at night during the blackout where only the faint outlines of buildings, including St. Paul's Cathedral, can be seen and the last two pages showing Churchill and Rufus from the back, the two war dogs, sitting side by side on a grassy knoll, looking over the  tranquil grounds of Churchill's home after the war and a job well done.

War Dogs is Kathryn Selbert's debut work and it is an excellent beginning for this talented artist.   In addition, Selbert has also included back matter which includes a timeline, information about Churchill and poodles and about Churchill himself.  There are also websites, books and a bibliography for more in-depth information.

This is also an excellent book to use as a teaching aid in the classroom or for home schooling.