On the Wings of Heroes by Richard Peck 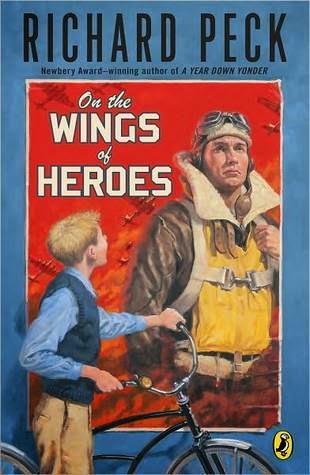 You can't go wrong when you chose a book by Richard Peck to read and On the Wings of Heroes is not exception.  This gentle home front story takes place in middle America, in a family like so many others at that time.

Before the war, narrator Davy Bowman tells us, it was always summer, except when it was Halloween or Christmas.  Summer meant exciting games of Hide and Seek with all the kids, including his big brother Bill and his dad, Earl, the biggest kid on the block.  Halloween 1941, Davy is a cub scout who thinks he and his best friend Scooter could get one more year of trick or treating in before they were too old for it, and before the war took away all sweet treats.  And that Christmas, Davy and Scooter both hope against hope to get the new shiny two tone cream and crimson Schwinn bike in the window of Black's Hardware.  But then, Pearl Harbor is bombed and life changes for everyone.

School is now overcrowded with "Eight-to-Five Orphans," new kids from other places whose mothers are working in factories so no one is home during the day.  Air raid drills are the order of the day, in case of an attack; scrape is being collected by all the kids;  dimes are brought in to school once a week to buy war bonds; and Victory Gardens are dug and tended everywhere.

And Davy's hero, big brother Bill, joins the Army Air Corps, causing his family to live a constant state of pride, fear and anxiety, which becomes unbearable fear when they receive the news that Bill went missing in action while flying a B-17 over the English Channel.

As Davy takes us through life during the war, he recounts episodes with class bullies, three of the girls who are part of the Eight-to-Five Orphans; a little extortion ring collecting their dime protection money each week when it is time to buy bonds,; an old lady who has a genuine Pan American car in her garage that Davy and Scooter discover during a scrap collection excursion and who holds an even greater surprise for them than the buckshot she fires when she discovers them in her garage; and the old lady who hordes everything, including every newspaper she has ever received.  All these eccentric characters are given their own background story, including families created by Peck with a kind of depth and charming believability, so they become more than just plot devices.

On the Wings of Heroes is an historical fiction novel that will give you a sense of the war from the perspective of a preteen boy and will leave you with a warm feeling of family and community, of love and support.  Ironically, some of Peck's descriptions of neighborhood life, such as Halloween or playing Hide and Seek, are not so very different from my own memories of those things many years later, providing a comforting kind to timelessness that connects people through time and space.

On the Wings of Heroes is a serious, entertaining and thought-provoking novel.  Peck writes, even about war, with lots of humor, and I dare say, experience, since he would have grown up during WWII, just as Davy does and giving the novel a real sense of authenticity.