Hidden: A Child's Story of the Holocaust by Loïc Dauvillier, illustrated by Marc Lizano 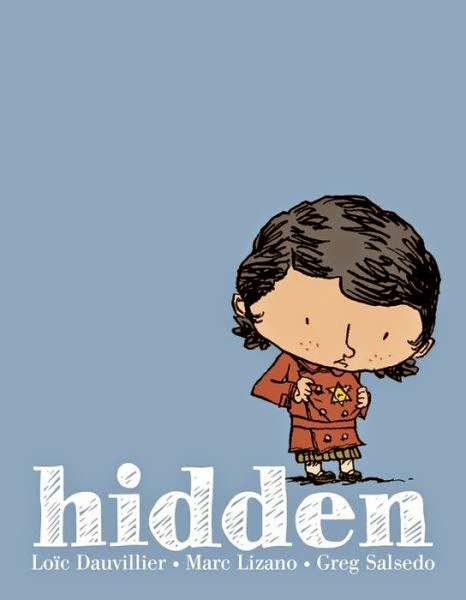 When Elsa, 6, discovers her grandmother, Dounia Cohen, crying one night, the little girl convinces her to talk about what's causing her tears.  And so, her grandma begins telling her about her own life when she was Elsa's age living in Paris.

Her best friend was Catherine and they both had a crush on Isaac, and all three went to the same school.  One day, when Dounia came home from school, her father was already there.  He told Dounia there were to become a family of sheriffs and soon a yellow star was sewn onto her clothes.  The next day, Isaac didn't show up for school and Dounia was told to sit in the back of the room, and learned that her star was meant to mark her as Jewish, not a sheriff.

When the police show up at the door one night, Dounia's parents put her into a hiding place and tell her to quietly wait for someone to come and get her.  When her neighbor comes, Dounia learns that her parents had been taken away, and the apartment ransacked.

The neighbors, Mr. and Mrs. Péricard, take care of Dounia in secret as long as they can, but eventually they learn that the police are planning a surprise visit to find her.  Dounia's name is changed to Simone Pierret, but before they can get away, someone spots Dounia.  She and Mrs. Péricard make it to the prearranged point for Dounia to be picked up and moved, but now Mrs. Péricard is also in danger and has no idea what happened to her husband.  The two are taken to the farm of an older woman named Germaine by Resistance workers.  Dounia had been told she must think of the Péricards as her parents, and now as Simone, she also becomes a young Catholic girl in order to keep her safe and hidden from the Nazis.

Dounia and Mrs. Péricard remain on the farm for the rest of the war, each wondering what became of their loved ones.

Hidden is the powerful story of a young girl who doesn't completely understand what is happening around her, why people suddenly dislike her and all other Jews so much and, most importantly, the sudden disappearance of so many people including her parents,   How does one deal with this?  Clearly, it took Dounia years to do that, since even her own son didn't know about his mother's experiences in Nazi occupation of France.

How does a young reader who is hearing about the Holocaust for possibly the first time deal with such a disturbing subject?  Clearly, a book about the Holocaust for kids, whether it is a graphic or traditional picture book, requires a very fine balance between story, information, and illustrations so that the story gives just the right amount of age appropriate information, but not so much that you frighten kids.  Hidden is a book that is so powerful in its simplicity, to honest in it telling that it definitely achieves this fine balance.

The translation by Alexis Siegel from the original French into English contains no ambiguities, and the dialogue flows comfortably and naturally.  I seem to be reading graphic novels about World War II and the Holocaust more and more lately, and they seem to be getting better and better.  The illustrations by Marc Lizano are reminiscent of a child's drawing, though the background is more sophisticated.  Still, the faces, even in their simplicity, really manage to convey a wide range of emotions - fear, sadness, anger, kindness, hate, love and ultimately even hope.  And the colorist, Greg Salsedo, really gives the illustrations a sense of the time, place and mood using his color palette.

Dounia's story is similar to that of many children in France.  In fact, in the Afterword, Hellen Kaufmann, president of the AJPN (Association Anonymes, Justes et Persecutés pendant la période nazie) writes that 84% of Jewish children living in France before the war survived because of people like Mrs. Péricard and Germaine and the Resistance workers who found safe homes for them were willing to risk their own lives to hide and protect these children from the Nazis and the collaborating French police.

This book is recommended for readers age 6+
This book was purchased for my personal library
Posted by Alex at 12:57 PM