Dust of Eden by Mariko Nagai 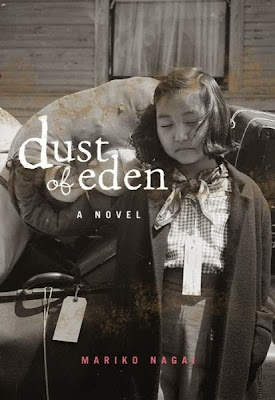 The experience of Japanese Americans who were rounded up and placed in internment camps throughout the United States in areas isolated from the rest of society are a varied as the individuals themselves.  But they do have some things in common - confusion, anger, humiliation, loss of identity, inhumane conditions and dust, incredible amounts of dust due to the isolated areas these camps were built in.  And we find all of these things in Miriko Nagai's forthcoming novel Dust of Eden.

Mina Masako Tagawa, 12, was living a pretty contented life in Seattle, Washington in 1941 with her parents, older brother Nick and grandfather.  But when the Japanese bombed Pearl Harbor, Mina soon discovers that, with the exception of her best friend Jamie, old friends are now new enemies.   Soon her father is taken into custody, merchants refuse to sell food ro them, kids in school hiss the words Jap and go home at Masako.

In February 1942, President Roosevelt signs Executive Order 9066 and before they know it, the Tagawa family is temporarily relocated to a place called Camp Puyallup Assembly Center, euphemistically called Camp Harmony.  A former fair site, the Tagawas are placed in a former horse stall, and given bags to fill with hay to sleep on.

Living conditions are terrible, but in August 1942 the family is moved to the Minidoka Relocation Center in Hunt, Idaho.  Eventually a makeshift school is set up that Masako attends.  Nick begins to not come home before curfew and is angry all the time, and mother gets a job washing dishes.  Eventually, Masako's father returns, now a broken man.  Grandpa, however, begins to cultivate roses in the dusty soil.

The Tagawas, like most of the Japanese Americans, were convinced that they would soon be allowed to return to their homes, but as 1942 became 1943, it became clear that was not going to happen.  Masako is resentful that they are treated like enemy instead of citizens, but when the US Army begins to accept some of the detained men, her brother wants to join up, against his father's wishes, to prove he is an American.

By 1945, Nick is still fighting in Europe, Grandpa has actually successfully managed to coax roses to grow and many families have started to leave the camp and return home.  The Tagawa family has gone through many changes in the years of detainment.  Can they really return to the life they once knew in Seattle after such an ordeal?

Dust of Eden is written in free verse, with the exception of the letters exchanged between Nick and his sister.  Everything the family experiences is told in the first person in the voice of Masako.   This was an interesting, compelling novel, though I found myself annoyed at Masako much of the time.  In most stories about Japanese Internment, the main character feels much of the same things that Masako does, but at some point they take charge of their lives even under these oppressive circumstances.  But she never does that, and her passivity irked me.  Her grandfather was a master grower of roses and she could have at least learned what he had to offer.  He was the only one who made an effort to improve their dreadful life.

I thought Nick would have been a more interesting character to read about.  Where did he go all those times he was breaking curfew?  With whom did he hang out?  What was army life like for him as a Japanese American?

I would still recommend this novel, since it does give us another perspective on the treatment of Japanese Americans in WW2 by our government and citizens, not our shiniest moment.  It would pair nicely with Imprisoned: the betrayal of Japanese Americans during World War II by Martin W. Sandler, which was based on interviews of people interned at around Masako's age.

You can learn more about Minidoka Relocation Center HERE

NB: The cover photograph was taken by Dorothea Lange.  Lange was a talented photographer hired by the War Location Authority to photograph the relocation of Japanese Americans in WW2.  Lange's photographs were so critical of the government and so sympathetic to the Japanese Americans that they were censored by the government and not seen for many years.  You can find some examples of her work at the Library of Congress online exhibit "Women Come to the Front"