From the Archives #25: The Quest of the MIssing Map by Carolyn Keene 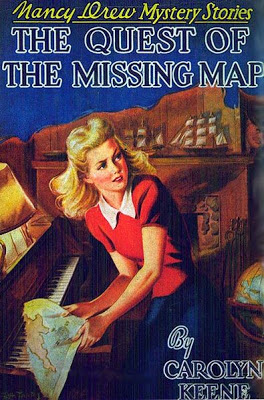 What did girls read during WWII when they wanted to get away from the war?  Well, one of the things they liked to read were the same books that Laura Bush, Hilary Rodham Clinton, Oprah Winfrey, Sonia Sotomayor, Ruth Bader Ginsburg, Gayle King, Diane Sawyer, Nancy Pelosi, as well as Congresswoman Pat Schroeder, filmmaker Pamela Beere Briggs, SEC Chairwoman Mary Jo White, and Federal Judge Roslynn R. Mauskopf, American Girl Molly McIntire and I read, and maybe you did, too.

What am I talking about?
None other than Nancy Drew, the teenage girl detective who wore frocks and drove a roadster.  And, now that American Girl is going to retire Molly and her friend Emily Bennett, an evacuee from the London Blitz, I thought I would have a look at the Nancy Drew book that sat on Molly's night stand all these years.

The Quest of the Missing Map was published in 1942, shortly after the US entered WWII.  The quest begins when Hannah Gruen, the Drew housekeeper, asks Nancy to help the Smiths, a family that she used to work for.  They are in possession of half of a map given to Mr. Smith by his father, a sea captain indicating a small uncharted island in the Atlantic where he had buried a treasure.  Now, needing money, the Smiths would like to find the other half of the map.  That half had been in possession of the twin brother of Mr. Smith but the twins had lost track of each other over time.

The search for the lost brother leads Nancy to a widow, Mrs. Chatham and her young daughter Trixie living on an estate not far away.   The estate had originally been owned by an inventor and there are all kinds of secrets places hidden away, especially in a small cottage on the grounds.  And as it turns out, the widow had been married to the lost twin brother, now deceased.

But, of course, Nancy isn't the only one who is suddenly looking for the treasure map.  Leaving the Smith home, Nancy realizes she is being followed by a Mr. Bellows, who had tried to buy the Smith's half of the map earlier  Later, the Smith home is robbed of the map.  The Smiths are upset, but Nancy had drawn a copy of the now missing half of map.  Unfortunately, she is overheard by a couple who also want to find the treasure when she tells the Smiths about her copy.

Later, at a college dance Nancy is attending with boyfriend Ned Nickerson, the couple kidnap her to try to get the map, though Nancy manages to easily get away.  But Nancy soon discovers that a clue may be in a ship model that Mrs. Chatham had sold.  Unfortunately, the crooks also learn about this, but again Nancy makes a copy of what she finds after hunting down the ship model.

The quest for the map begins to take dangerous turns and Nancy is in turn kidnapped twice, tied up, knocked out and robbed.  And ironically, no one really knows if there is a real treasure to be found or if this is just a wild goose chase.

Treasure or no treasure, this is an exciting Nancy Drew story.  There is a lot more action than I remembered, but one thing is for certain - Nancy is one cool headed character and we often get to witness her logical reasoning.  Though she consults her father, lawyer Carson Drew, occasionally, she is a very competent, feisty, independent 18 year old, and it doesn't hurt that she has that nice blue roadster for getting around.  Small wonder Nancy had such an impact on the lives of so many girls.

It is often said that Nancy Drew's world is never impacted by realities such as the Depression of the 1930s or World War II.  And that was how I remembered the series.  So imagine my surprise when I came across two war related references.  While exploring, Nancy and her friend George found two letters and a machine of some kind in a secret tunnel on Mrs. Chatham's estate.  One of the letters mentions the machine might be of interest to the War Department (pgs 76-89).   Later, an old man tells Nancy "War bickering...Yes, there's plenty of it these days.  What the world's a-coming to I don't know." (pg 141

Most of the Nancy Drew books I read were hand-me-downs which is how I ended up with some old original editions belonging to I don't know who.  But I am pretty certain I read the same edition as the book on Molly McIntire's nightstand.  Take a look at the title page:

The Quest of the Missing Map is the first time I have reread a Nancy Drew book since I was about 10 years old.  I can't say it was my favorite story, but I'm not sure I want to reread any more Nancy Drews.  I think I would rather let my romanticized memory of the books remain intact.   Sometimes that is just the better thing to do.

The New Yorker Magazine published an interesting article by Meghan O'Rourke from 2004 called Nancy Drew's Father (her creator/publisher Edward Stratemeyer not Carson Drew) in which she writes about Nancy's beginnings and her continues success.

The Quest of the Missing Map was ghost written by Mildred Wirt Benson, who wrote many of the early books in the Nancy Drew series.  You can find out more about Mildred and the other books she wrote HERE