Sophia's War: A Tale of the Revolution by Avi 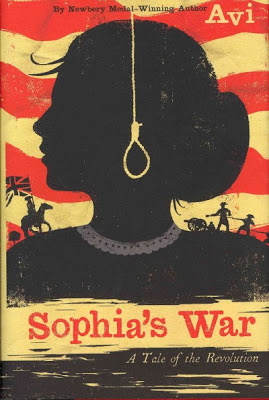 Avi has always been a favorite in our house and his latest book, Sophia's War, is another addition to his oeuvre of historical fiction that doesn't fail to satisfy.  This time Avi takes the reader back to the American Revolution.

For 12 year old Sophia Calderwood, the revolutionary war is personal.  Forced to flee with her mother and father when the British attack and seize lower Manhattan, on her return, Sophia and her mother witness, first, the hanging of Nathan Hale by the British for being a spy and second, the burnt remains of part of their lower New York settlement.  Fortunately, the Calderwood house, though ransacked, is still standing.

Sophia's father had thought it wise to remain at a friend's house in northern Manhattan, but he soon shows up at home with a gunshot in him arm.  It is decided that he will remain sequestered at home for now, since he is a known patriot and needs to recover.  As for Sophia's brother William, a soldier fighting under General Washington, there has been no news of him for a while.

On top of all this, with the British now in charge, the Calderwoods are forced to billet a soldier.  Lieutenant John André, handsome, cultured and kind, arrives at their door and Sophia is immediately taken in by his attention and many charms.


"In short, having never met so well bred and civilized a man as John André, I was greatly flattered by the attention.  Indeed, I was nothing less than enthralled." (pg 56)

When Sophia lets slip to John André the her brother is a patriot, he lets her know that he will keep the information to himself, and that he will do whatever he can to help her family.  So naturally, when Sophia discovers her brother seriously ill and starving in one of the British prisons known for their deplorable conditions,  she is sure John André will help him.

The news that John André has been ordered to go to Staten Island immediately, prompts the Calderwoods to ask if he will help William.  When Sophia confronts him about this, he tells her he cannot do anything, that his honor as a British officer is the most important thing in the world to him.  But when Sophia reminds him that he had promised that, if needed, he would anything he could for her, he responds that a promise to a 12 year old is not like a pledge to a lady, and that she is not yet a lady.

Shaken to her core by this, Sophia vows to save William.

Fast forward to 1780, the war is still being fought.  Sophia is now 15, working in a print shop to help her family out.  There, because she can read, she is recruited as a spy for the Americans.  Placed in the home of British General Clinton as a housemaid, she is asked to report any information she finds.  But just as she discovers a plot of treasonous proportions involving an American general and her old friends John André, the person she reports to has disappeared for safety reasons.

What to do with all this information?  Here is Sophia's opportunity to get revenge on John André for failing to help William by exposing the plot she has uncovered.  Can a young 15 year old succeed against all odds and possibly change the tide of the war?

Sophia's War was an exciting book to read.  Avi has taken a real event of the American Revolution that has many aspects to it that have never been explained and offers a cogent explanation.  And why not?  This is what historical fiction is all about.  All the places and events, as well as most of the characters in Sophia's War are real and you will probably recognize them from history lessons.  It is told in the voice of  self-conscious narrator Sophia, who directly addresses her readers in several places, making it sound plausible, while at the same time reminding us she is a fiction.

I thought this was one of Avi's best novels and I have loved all of them.  My one reservation about Sophia's War was the revenge aspect of her motivation.  But, of course, in the end, there is much to learn from Sophia's motivations.  Do read this novel is you enjoy good historical fiction.