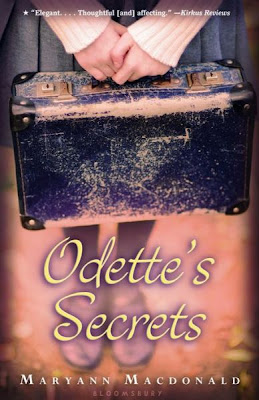 "My name is Odette.

I live in Paris."

Odette Meyers lives with her parents in an apartment building in Paris and spends a lots of time with her godmother, Madame Marie, who is also the building's caretaker.  Odette is around 5 when the Second World War begins.  Her father and uncle immediately enlist in the French army, but are soon captured and sent to a Nazi labor camp.  Despite the war, life is OK until the Nazis march into Paris and changes drastically for everyone.  And Odette quickly learns that being a secular Jew doesn't matter to the Nazis - they hate all Jews equally.

One night, when the Nazis are rounding up Jews to send east, Madame Marie hides Odette and her mother in her broom closet and deftly manages to keep the Nazis from searching it and the Meyer's apartment.   But life is now too dangerous for Odette and her mother, who also works with the French Resistance and it is decided to send Odettte away.  With the help of Madame Marie and her husband Monsieur Henri, Odette is sent to live with a family in the French countryside.  There she must pretend to be Catholic, learning everything a young Catholic girl would need to know.  As she quickly assimilates herself into the life of the family, church and country life, Odette begins to feel safer:

"I know the reason I feel safe in the country.
It's because here,
I am not a Jew."

But when her mother comes at Christmas to visit, she is not really pleased to see her daughter in this new Catholic light, even though it is the reason her child is safe.  Before the winter is over, she comes to take Odette away to a little cottage in the country where they can live together.  They adjust and begin living a quiet life, until one day Odette's new best friend accuses them of being Jews who have fled Paris.  And though she denies the accusation, Odette is nevertheless attacked by the other schoolchildren.  Life is again getting more dangerous for Odette and her mother and now the old farmer Père René has overheard Odettte's prayer for Our Lady to watch over them because they are Jewish.  Will Père René keep this secret, just as Odette must keep all the secrets she has in order to be safe?

Though fictional, Odette's Secrets is based on the real Odette Meyers.  Having acquired as many facts about Odette's life as she could, Maryann MacDonald filled in the blanks using her imagination and ides.  The story follows Odette's life for the length of the war, or until she is around 10 years old.  It is written in free verse, and at the beginning, Odette's voice is age appropriate and ages as she ages. 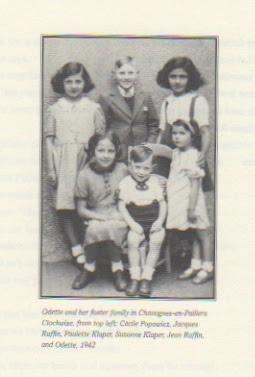 Free verse is a style I am really beginning to like for some historical Fiction written for young readers.  Odette's Secrets.  Its brevity provides a more focused perspective, allowing the reader to really feel the words being read.  And though I would recommend a steady diet of free verse novels, I think it is the ideal form for

There a a number of photographs throughout the novel of the real Odette, her mother and the family she lived with.  I was sorry there was no picture of Madame Marie, with whom Odette has such a close relationship.  This is a wonderful story of one Jewish girl's survival in WWII in Frances.  According to the Author's Note at the back of the book, 11, 400 children were deported from France, but 84% of French children did survive.  How, MacDonald wondered, did that happen?  Odette's Secrets is the result of that thought.

There is a very interesting interview with author Maryann MacDonald over at The Hopeful Heroine in which she discusses her inspiration for this story and her reasons for writing it in free verse.