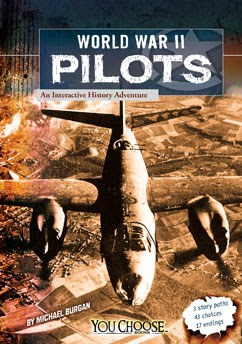 Last April, I reviewed an interactive book from the YouChoose World War II series called World War II: On the Home Front by Martin Gitlin.  I found it to be an excellent book for introducing readers to life on the home front.

Now comes this latest YouChoose adventure, World War II Pilots.  The basic premise is that you are given a situation and the story unfolds based on the choices you make at certain junctures of the story.   In Chapter 1 of World War II Pilots, the reader is first given some historical information about the events that led to the war beginning at the end of World War I.

At the end of the chapter, you have 3 choices: to follow the path of a British pilot in the RAF, an American pilot fighting in the Pacific Ocean or a Tuskegee Airman - all very interesting choices.  So you choose your path and at the end of each chapter, more choices can be made regarding the fate of the chosen pilot.  In fact, there are 36 choices altogether, given each pilot 12 possible ways to go.  And in the end, there are 20 different possible endings - 7 for the RAF pilot, & for the American pilot and 6 for the Tuskegee Airman.

I know this all sounds complicated.  I also think that, too, whenever I start these kinds of books, but they are designed for young readers and really aren't difficult at all and in fact, they are quite informative without being overwhelming.  I actually enjoyed going back and forth and making choices to see where each path led.  I also liked the photographs that are included and relevant to the path I was following.  For example, when I picked the Pacific Ocean pilot, there were pictures of things like Bataan, or the carrier he might taken off from.  I also found that concepts that might not be familiar were clearly explained.

I especially like the back matter.  First, there is a timeline of events in the war relevant to the stories.  Next, there are suggestions for designing your own World War II pilot stories - a female pilot in the RAF or in the US, a German pilot during the Blitz, a POW held by the Japanese or Germans, all requiring so research and imagination.  To help this along, there are suggestions for further reading in print and the Internet, a glossary and an extensive bibliography.

World War II Pilots is an excellent book for leisure reading as well as home schooling and classroom use.

Curious?  You can download a sample chapter of World War II Pilots at Capstone Young Readers.

Nonfiction Monday is hosted this week by Laura at laurasalas