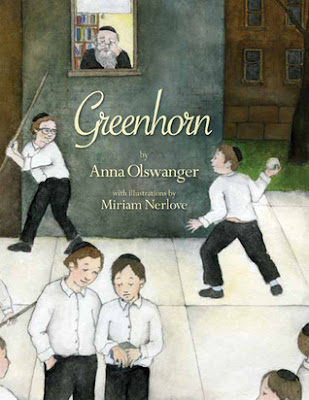 Greenhorn is a heart-warming story of two outsiders who become life-long friends.  With lovely folk art type illustrations by Miriam Nerlove, the story is set in a Yeshiva, a boarding school in Brooklyn, NY in 1946 and narrated in the first person by Aaron, a student there and a boy who speaks with a stutter, to the annoyance/amusement of the other boys in the school.

One day, the Rabbi interrupts a class during their recess to announce that twenty boys from Poland, who, unlike their parents, survived the Holocaust, will soon be arriving at the school.

After the Polish boys arrive, one of them, Daniel, is assigned to Aaron's room, already crowded with three boys.  The other boys don't really welcome their new roommate, and start going after him for being skinny and not speaking.  They nickname him Greenhorn, but there is not affection in the name.  Aaron realizes that Daniel doesn't speak English and asks if he understands Yiddish.  At first, Daniel doesn't respond to any of the boys, except with fear when they bring up the Nazis.

Eventually, the Polish boys all start speaking English, except Daniel, who, it turns out, does know Yiddish and will only speak it.  Yet, no matter what kind of friendly overtures are made to Daniel he never joins in.  Nevertheless, Aaron keeps trying to be friends with Daniel.  One day, while the boys are picking on him because of his stutter, Daniel comes to Aaron's defense - in English.

Things get better after that, but not much and the other boys begin to really focus on the little box Daniel carries around with him, even putting it under his pillow at night.  One night Aaron notices that the box had fallen on the floor, opened and the content had fallen out.  It looked like a rock to Aaron, but when he asked Daniel about it, he received no reply.  "F-F-Friends don't keep secrets from each other." Aaron tells him.  But Daniel was sleeping.

But what's in Daniel's box that he carried all the way from Poland and never let out of his sight?  Was this the end of Aaron's attempts to be friends?

Most American children really didn't comprehend how conditions were in Europe for Jews during the war.  Of course, by 1946 they had heard about what happened in concentration camps, but it was still hard for them to grasp the full measure of things.  To her credit, Anna Olswanger has depicted this aspect of life even in a place like a Yeshiva.  But I think she has done an outstanding job of depicting the kind of trauma kids who were caught of in the actual events and who lost parents, siblings and other relatives suffered from.  It seems like it would be just unimaginable, but you do get the idea from this short but powerful story.

Healing is a long hard road, but this is a story of friendship and it is based on a true event.  The boy Aaron grew up to be Rabbi Rafael Grossman.  He lost touch with the real life "Daniel."  But one day, while visiting Israel, he ran into him again, "Daniel" had become a pediatrician, working and living in Israel.

And yes, eventually Aaron/Rabbi Grossman did find out what was in Daniel's box and why it was so important.

This is just my feeling but, although this is a story written for readers around 9+ years old, I think it might be a good idea for them to read this little book with some supervision.  Not that the events involved are described in graphic detail, but some of what the Nazis did to people is not always covered in books for kids.  That being said, it would still highly recommend it.

This book is recommended for readers age 9+
This book was sent to me by the publisher.

The author, Anna Olswanger, has written a very interesting guest post about Greenhorn over at Cynsations

There is a Goodreads Greenhorn Givaway running until February 17 and you enter to win a copy here
Posted by Alex at 7:24 AM