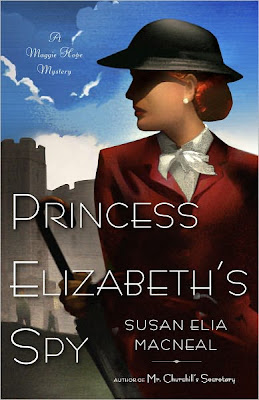 Princess Elizabeth's Spy is the second mystery in the Maggie Hope series by Susan Elia MacNeal.  When last we left our WWII heroine, Maggie Hope in Mr. Churchill's Secretary, she was leaving her post as a typist for Winston Churchill, Prime Minister of Britain to begin espionage training for MI-5 (Military Intelligence Section 5).  Maggie, after all, is a gifted mathematician with a degree from Wellesley College and was on her way to graduate school at MIT when the war broke out while she was visiting England.

Unfortunately for Maggie,  spy school doesn't work out quite as well as she had hoped and now MI-5 is going to reassign her.  Her new assignment is to go undercover at Windsor Castle as the maths tutor to the 14 year old Princess Elizabeth.  In reality, she is to be on the lookout for any unusual activity that might put the future Queen of England in danger.  And, indeed, there does seem to be a plot underfoot to replace the reigning Royals with the recently abdicated, Nazi admiring Edward VIII and his wife, Wallis Simpson, the Duke and Duchess of Windsor, once the Nazis have invaded England.  And the Princess Elizabeth would definitely be an obstacle to these plans.

Arriving at Windsor, Maggie quickly discovers that the good part of living there is that it isn't a target for the bombs Germany has been dropping mercilessly throughout England; the bad part, no special advantages for royalty - it is terribly cold and everything is rationed.  Nevertheless, she quickly forms a rapport with both Princess Elizabeth and her younger sister, Princess Margaret, and easily adjusts to castle life, making only a minimal number of faux pas.

Maggie isn't at Windsor long, however, when Lily, a lady-in-waiting at the castle, is decapitated while out riding with the two Princesses by a wire attached to two trees and strung across the riding path.  But, perhaps the wire had actually been meant for the Princess Elizabeth instead?  And the plot thickens  even more when Maggie accidentally discovers a missing decoded message in one of Lily's books.  The Germans were pretty confident that their messages, sent using an Enigma cypher, were safe and that no one could break their code. Why did Lily have it and is her death connected to the murder of the woman who is suspected of stealing the decoded message from Bletchley Park?

To make Maggie's life even more complicated, the mystery surrounding her father, a spy for MI-5 working at Bletchley Park deepens.  Edmund Hope had been suspected of being a double agent in World War I, but nothing was proven.  Is he somehow connected to the stolen decoded message and a traitor to his country in this war?

And what about Maggie's love interest, John Sterling, RAF pilot shot down over Germany?  Is he dead or alive?

Series books tend to get better and better with each new book and that is true of Princess Elizabeth's Spy.  First books in a series are concerned with introducing important recurring characters and telling why they are there.  Second and subsequent books can get right down to business and that is exactly what Susan Elia MacNeal has done here.  Princess Elizabeth's Spy is chock full of mystery, intrigue, suspense and, my favorite, historical fact so excellently mixed in with historical fiction.

Maggie remains a charming protagonist, the more so because, as intelligent as she is, she doesn't get things right ALL the time.  Maggie, like all of us, is sometimes blinded by her own biases towards people which can cloud her judgement.

It is pretty obvious as you read Princess Elizabeth's Spy that MacNeal has done her research well.  The story is full of actual historical characters, some familiar like Churchill, others less familiar, like the Duke of Windsor, or Walther Schellenberg, head of Abwehr (German Intelligence Service).  I did find that the portrait of the Princess Elizabeth and the Princess Margaret that MacNeal paints for her readers, like that of Churchill, makes them feel more human but no less royal and the sense of duty that has been a hallmark of the present Queen Elizabeth's reign is very apparent in her younger, fictional self.  The fact that the Princesses knew their way around the dungeons below Windsor Castle was a very nice, fun touch.  But what personally interested me were all the bits surrounding codes in the novel, from the Enigma to the simple code Maggie taught Princess Elizabeth.  Codes and cyphers have always fascinated me and lately it seems I have been reading a lot of books dealing with them.

Princess Elizabeth's Spy is the kind of mystery that has lots of crossover appeal for YA readers, including a very titillating ending.  Of course, given the ending, now I can't wait to read the third book in the Maggie Hope series, His Majesty's Hope, due out May 2013.