Jump into the Sky by Shelley Pearsall 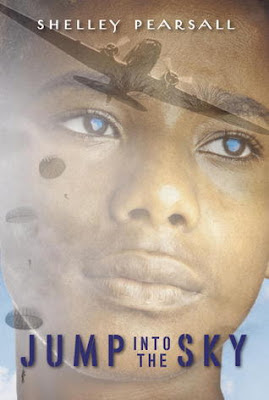 Imagine being a 13 year old African American boy living in Chicago with your aunt during WWII while your father is away in the Air Force.  Imagine further that one morning, out of the blue, your aunt tells you it is time for you to see your father again and that afternoon, without even saying good-bye to your best friend, you find yourself on a train heading to Camp Mackall in North Carolina.  Sounds pretty harsh, doesn't it?

Jump into the Sky begins in May 1945.  The war has ended in Europe but not in the Pacific.  And not in the south either, where Jim Crow stills reigns.  Young Levi's first experience of that happens when he changes trains in Washington DC and is put in an almost empty car right behind the coal-burning engines.  There he meets an older man who gives him his first lesson in Jim Crow laws.

Levi is astounded by what he hears, so much so he doesn't believe what he has been told until he finds himself looking down the barrel of a gun while trying to buy a Coke in a store at the end of his journey in Fayetteville.   He manages to get out of the store alive, though not before experiencing a little more Jim Crow welcome.  Afraid and humiliated, Levi starts walking the miles to Camp Mackall, where is father is stationed.  Along the way, he is picked up by a black soldier, but discovers that his father, Lieutenant Charles Battle and the rest of the 555th Parachute Infantry Battalion, the country's only all black unit in the Air Force, has been moved on to Oregon.

Luckily for Levi, the one member of his father's Battalion still around because of an injury finds Levi and takes him home, where he ends up living for the first part of the summer.  Cal and his wife Peaches both know Levi's father, so there is some comfort in that.  And as soon as Cal's injury is healed, he gets his orders to head to Oregon, too.  What a surprise when they find that 555th's assignment is to fight fires along the west coast.

In Oregon, the story begins to diverge.  On the one hand, Levi and his father had been separated for three years and both have changed a great deal.  Now, they must get to know each other and for Levi that means learning to trust his father as well as himself.  Levi has a history of people leaving him, including his father and his mother.  And now he has an aunt who no longer wants to take care of him.  Can things work out somehow so that he and his father can get along and live together?

On the other hand, there is the historical aspect of this novel.  Pearsall, who I was surprised to discover is not African American, has managed to convey the scathing hatred most whites had towards blacks in the south.  The fact that Levi was so naive about the rules and mores makes his time spent there all the more poignant.  Twice I felt myself getting angry and scared for Levi as he went through his baptism by fire.

And there is the other historical aspect - the heroes of the 555th Parachute Infantry Battalion.  No one back in Chicago really believed that his father was really doing what he said he was doing for the war but it turned out to be true, much to Levi's surprise.  In Oregon, the 555th were assigned to fight the fires resulting from fire balloons the Japanese were sending over.  These balloon bombs carried incendiary devices meant to explode and start fires wherever they landed.  Most people really didn't believe this was happening including the men of the 555th, and Pearsall realistically portrays the frustration these men must have really felt after all their elite training and knowing they were being laughed by people.  **Not a spoiler, but an historical fact** It turns out, the Japanese really did send over 9,000 of these balloon bombs.

Jump into the Sky is a nice coming of age adventure story with well developed characters and realistic settings.  I thought Pearsall gave us a clear, informative window into what life may have been like for some African Americans on the American home front at that time in Chicago, North Carolina and Oregon.

One more thing - why was Aunt Odella so anxious to get rid of Levi?  Well, I didn't see the answer to that coming.

More information about the 555th Parachute Infantry Battalion can be found here.