Halloween Special: Meet Molly by Valerie Tripp and Have a Molly Halloween


Meet Molly is the first novel of the six Molly McIntire series books from American Girl.  Molly is 9 year old and living on the American home front during World War II.  Her father, Dr. McIntire, had joined the Army when war was declared and is stationed in England, where he is caring for wounded soldiers.  Molly's mother is doing her bit working for the Red Cross.  Molly has a sister Jill, 14, a brother Ricky, 12, and a brother Brad, 5.  Molly's two best friends are Linda and Susan.

It is 1944 and the war is still raging in Europe and the Pacific.  The country is feeling the effects of rationing and shortages, so people really have to be clever and economical about coming up with Halloween costumes and treats.  As the story opens, Molly has been sitting at the dinner table for over 2 hours with a plate of cold turnips in front of her.  Molly, a rather headstrong girl, had refused to eat the turnips and Mrs. Gilford, just as headstrong, refused to excuse her until they were gone.  Molly spent her table time dreaming of the beautiful Cinderella costume she was planning to wear for Halloween, IF her mother would buy the yards of fancy material needed and IF she agrees to sew it for Molly.  This dream, however, quickly hits reality the next day when her best friends are less then enthusiastic about being the ugly stepsisters to Molly's Cinderella.

But Mrs. McIntire saves the day when she suggests the girls go as Hawaiian hula dancers and shows them how to make a costume using crepe paper, paint and strips of newspaper.  All three girls are very happy with this costume, and go off trick or treating after school, and collecting lots of goodies by the end of the day.  The only problem is Ricky, who has planned his revenge on the girls for having teased him about his crush on Jill's friend Dolores earlier.  And after he ruins their costumes and their treats when he douses them with water, the girls decide to declare war on Ricky and to get their revenge on him.

There are, of course, lessons to learn in Meet Molly about fighting, peace and sharing - good lessons in general but here also very apropos of the time.

In this nicely done chapter book, Valerie Tripp has managed to get much of life on the home front onto Molly's Halloween story.  There is Mrs. Gilford's Victory Garden that didn't do as well as hoped because of the excessively hot summer; Mom's job that takes her away from home so much of the time; missing Dad and wondering whether he is alright and of course, wanting things to be the way they used to be.  And at the end of the novel, there is short "A Peek into the Past" which covers the cause of the war and tells something about how life really was for kids like Molly on 1944 home front. 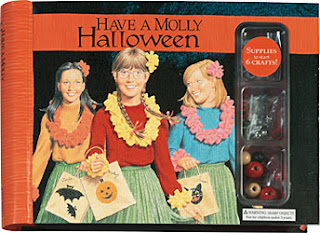 I love a good activity book and a nice companion to Meet Molly is Have a Molly Halloween, an activity book for making the kinds of Halloween treats, games, and decorations Molly might have made in 1944, along with instructions for making Molly's Hawaiian hula costume and her brother Ricky's pirate outfit.  There are a total of 37 activities in the book along supplies for making six crafts, including beads, pipe cleaners, and stickers.  All of the activities are easy and fun for kids to make.  Have a Molly Halloween is currently out of print but you can still find it online, and often with the craft supplies intact and for a reasonable price.

These are two favorites we did in my house over the years: 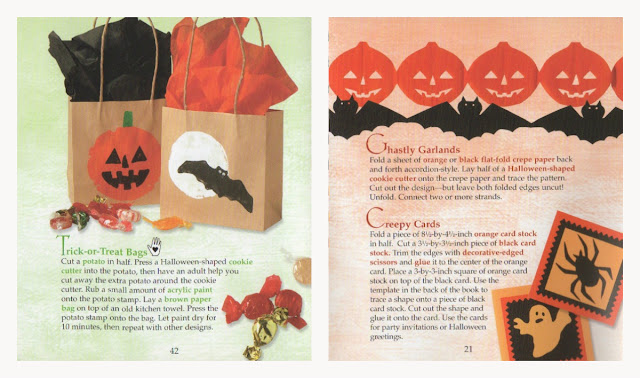 The trick or treat bags were especially popular and we also bought some small brown paper bags, decorated them with Halloween designs, fill them with some candy and tied it all up with twine to give to any trick or treaters who can to the door.  It was a lot of fun and a nice family project.

Halloween wasn't really celebrated during World War II, certainly not the way it is nowadays.  Sugar was rationed, limiting the kinds of treats people could give to kids.  Popcorn balls and donuts were very popular, as were apples, which were never rationed.  With the country at war, some tricks would have just been too mean to play on people and rationing took care of things like soaping windows or toilet papering trees.  And of course the blackout meant NO lights, so evening trick or treating was out of the question.  Instead, many people chose to just have parties at home, doing things like dunking for apples, pin the tail on the devil and other easy to do games.  And what could be better in a darkened world than  telling scary ghost stories.  Scouts, churches and other organizations also threw parties for kids, either after school or on the weekend.  Wherever the party, it was a chance for kids to demonstrate their creativity coming up with costumes and decorations using whatever was at hand, unless you were one of these kids who were lucky enough to have a popular Army, Navy, Air Force kid-sized uniform or the ever popular nurse costume to wear.

However you choose to celebrate the day,


I Wish Everyone a Happy, Safe, Fun-filled Halloween